Charlecote Park is a grand 16th century country house in Warwickshire. It is surrounded by its own deer park, running down to the banks of the River Avon near Wellesbourne, about 4 miles east of Stratford-upon-Avon and 5½ miles south of Warwick. The house has been in the hands of the National Trust since 1946 and it is opened to the public. Charlecote Park is a Grade I listed building

The Lucy family has owned the land since 1247. Charlecote Park was built in 1558 by Sir Thomas Lucy, and Queen Elizabeth I stayed in the room that is now the drawing room. Although the general outline of the Elizabethan house remains, nowadays it is in fact mostly Victorian. Successive generations of the Lucy family had modified Charlecote Park over the centuries, but in 1823, George Hammond Lucy (High Sheriff of Warwickshire in 1831) inherited the house and set about recreating the house in its original style. 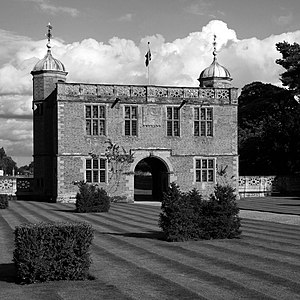 In the middle of the 19th century the Fairfax Baronets inherited the property when the male line of the Lucy family failed on the death of Henry Spencer Lucy. The baronets changed their family name to Lucy to reflect the traditions of Charlecote.

The Great Hall has a barrel-vaulted ceiling made of plaster painted to look like timber and is a fine setting for the splendid collection of family portraits. Other rooms have richly coloured wallpaper, decorated plaster ceilings and wood panelling. There are magnificent pieces of furniture and fine works of art, including a contemporary painting of Queen Elizabeth I. The original two-storey Elizabethan gatehouse that guards the approach to the house remains unaltered.

In the Great Hall, which is of the Tudor age, hangs the painting Charlecote Park by Sir Godfrey Kneller, painted in 1680. The painting is of Captain Thomas Lucy before his house, and of some sociological interest in including Captain Lucy’s black page boy in the background dressed in a blue livery coat and red stockings. In 1735 a black child called Philip Lucy was baptised at Charlecote.

View of Charlecote Park from the 1820s

Charlecote Park covers 185 acres, backing on to the River Avon.

Local stories hold that William Shakespeare poached rabbits and deer in the park as a young man and been brought before magistrates as a result,[1] but it is unclear whether there were any deer in the park at that time even if romantic imagination fills in the gaps from time to time.

The park was landscaped by Capability Brown in about 1760.

On display at the house is an original letter from Oliver Cromwell, dated 1654, summoning then owner Richard Lucy to the Barebones Parliament. Also on display is a 1760 portrait of George Lucy by Thomas Gainsborough, which cost Lucy the sum of eight guineas.[2]

A set of archives for the Lucy family at Charlecote is held by the National Archive[3] The house also has a display of carriages and a period laundry and brewroom.