Caversham is a village in Oxfordshire. It lies on the north bank of the River Thames, clustered around the bridge to Reading, Berkshire. Caversham Bridge and Reading Bridge provide crossing points, and Caversham Lock for pedestrians, with Sonning Bridge a few miles east of Caversham.

Caversham spreads across from the Thames floodplain (to the east) and up the foothills of the Chiltern Hills. Besides central Caversham (the shopping area and immediate residential surrounds), there are distinct areas known as "Caversham Heights" on the higher ground to the west, "Lower Caversham" to the south east, and "Caversham Park Village" to the north east on what was the parkland of Caversham Park. 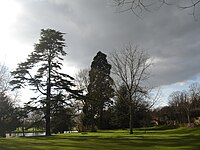