Catton Hall is a country house near the border between Derbyshire and Staffordshire. It gives its postal address as Walton-on-Trent although there was a village of Catton at one time.[2] It is a Grade-II* listed building.[3]

The Manor of Catton was acquired at the beginning of the 15th century by Roger Horton.[4] Members of the family served as High Sheriff of Derbyshire. In the 19th century Anne Beatrix Horton, heiress of the estate, married Robert Wilmot thus creating the Wilmot-Horton family.[5] On the death of the fifth Wilmot-Horton Baronet in 1887, the estate passed to his niece Augusta-Theresa who married in 1851 to Rev. Arthur Henry Anson, rector of Potterhanworth, Lincolnshire and son of Hon. Rev. Frederick Anson, Dean of Chester, born at the Anson family home Shugborough Hall. 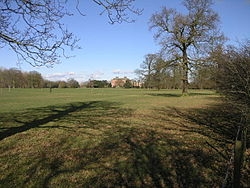 Catton Hall is now owned by the Neilson family, descendants of Anson-Horton family, descendants of the fifth Baronet, Rev. Sir George Wilmot-Horton.[6] The manor house which had been there since the 15th century was replaced by the current building in 1745.[7] It was built for Christopher Horton,[6] who had rejected many designs before finally accepting a grand design from William Smith in a more baroque style than had been seen at Chatsworth House and more recently and more like Calke Abbey. The building is nine bays wide and three storeys high.[1] Behind the Hall is an 1892 constructed chapel which has a Norman Font (possibly from when the village was mentioned in Domesday).[1]

The Hall is now available for private functions and horse trials. Since 2005, Catton Hall grounds have been home to the Bloodstock Open Air heavy metal festival. From 2014 the Bearded Theory Festival have also made Catton Park their home. Catton Hall has also hosted the Festival of Fireworks since 2007, it is held on the first Saturday in September. The UK's largest purchasing consortium, Independent Buyers Ltd has been headquartered at Catton Hall sine 2005.