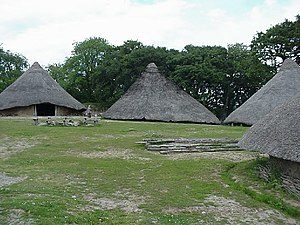 Castell Henllys (meaning "castle of the old court") is an Iron Age hill fort in the north of Pembrokeshire, east of the hamlet named Henllys and on the A487 road between Newport and Cardigan, above the north bank of the River Nevern. It is an important archaeological site, and within the site archaeologists have built huts of the period to explore the practical aspects of Iron Age life. The site is opened as an open-air museum.

The hillfort has been the subject of an ongoing excavation for more than twenty years, accompanied by an exercise in reconstruction archaeology whereby experiments in prehistoric farming have been practised. Four roundhouses and a granary have been reconstructed on their original Iron Age foundations, some 2,000 years old, the only site in Britain where this has been done.[1]

To the north of the site, where the entrance was, there are significant earthworks in the shape of several ditches and banks. Inside these fortifications, archaeologists have found evidence for numerous Iron Age roundhouses dating to between 500 and 100BC. Adjacent to the fort they discovered a farmstead settlement, which is believed to have been occupied throughout the Romano- British period.[2]

During the summer the site provides training for young archaeologists and is a popular visitor attraction.[3] It is owned by Pembrokeshire Coast National Park Authority.