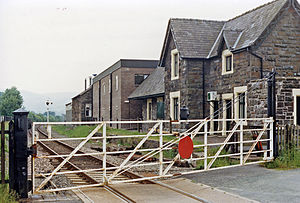 The former railway staton in 1986

Carno is a village and parish in Montgomeryshire. It is located on the main A470 road between Llanbrynmair & Caersws.

The local railway station, on the Cambrian Line, closed as part of the Beeching closures in the 1960s. An ongoing campaign started in August 2009 for its reopening, with the Welsh Assembly agreeing to do a business study as part of the Cambrian Rail Study.[1] At present, the adjacent stations on the line are at Caersws and Machynlleth.

Carno was the original base of the Laura Ashley company when Bernard and Laura moved there from Kent in 1961. The factory closed in 2005.[2]

Carno has the remains of a Roman Fort or mound (Gaer Noddfa), comprising a rectangular area 450ft by 270ft located on the bank of the River Carno adjoining the churchyard.[3][4] Local legend also makes reference to a supposed battle between two sons of Hywel Dda (Prince of Wales 942-950) in the area. One of the valleys, Cwm Nant y Penglog, is named after a stream which supposedly leads to the site of the battle as Cwm Nant y Penglog means 'Valley of the stream of the skull'.

This Montgomeryshire article is a stub: help to improve Wikishire by building it up.