Tiger Bay was the popular name for the bay area before it was regenerated and rebranded, a name which encompassed the dockers' village of Butetown.

The Bay is supplied by two rivers (Taff and Ely) to form a 500-acre freshwater lake round the former dockland area south of the city centre. The Bay was formerly tidal, and so high are the tides in the Bristol Channel here that access to the sea was limited to a couple of hours each side of high water. Now though the bay is kept full and three locks in the barrage provide 24-hour passage to the open sea.[1]

Cardiff Bay transformed Cardiff from a small town into a major city. Here John Crichton-Stuart, 3rd Marquess of Bute developed docks from which to transport the coal and copper from his mines to the rest of the world, helping to power the industrial age; the coal mining industry helped fund the building of Cardiff, and made the Marques of Bute the richest man in the world at the time.

As Cardiff exports grew, so did its population; dockworkers and sailors from across the world settled in neighbourhoods close to the docks, known as Tiger Bay, and communities from up to 45 different nationalities, including Norwegians, Somalis, Yemenis, Spaniards, Italians, West Indians and Irishmen, helped create the unique multicultural character of the area.

After the Second World War most of the industry closed down and became derelict.

In 1999 however, new life was injected into the area by the building of the Cardiff Bay Barrage, one of the most controversial building projects of the day but also one of the most successful.[2]

The Cardiff Bay Development Corporation (CBDC) was created in 1987 to stimulate the redevelopment of 2,700 acres of derelict land.[3] The Development Corporation aimed to attract private capital by spending public money to improve the area. Despite opposition by environmentalists and wildlife organisations, the mudflats at the mouths of the River Taff and River Ely were inundated, with loss of habitat for wading birds. The Barrage has created several new habitats for freshwater species with the wetlands to the south of the Hamadryad Park.

When the Development Corporation was wound up in on 31 March 2000, it had achieved many of its objectives. The whole area was unrecognisable from ten years before. Much private land was now open to the public, particularly around the inner harbour and the north side of Roath basin. Work is progressing to complete an 8-mile walkway around the Bay and the Barrage has created a world-class environment. In addition, the development has enabled land in the city centre to be redeveloped for higher-value uses.[4]

The development of "something like 1,250 apartments a year"[5] however might cause future problems. As at 2008 up to one third were not occupied, and the market has had to adjust accordingly.

Connecting the Bay area to the centre of Cardiff was a primary goal when plans to develop the docklands were first mooted. Original plans included a grand boulevard (similar to where Lloyd George Avenue is located now) with high density commercial and residential units straddling both sides. This would have created significant demand for quality public transport provisions facilitating connections to the new Bay area but public transport was often of poor quality and, but there are now much improved bus routes, and rail services from Cardiff Queen Street to Cardiff Bay railway station.

Not everyone has been impressed: in 2013 the planning consultant, Adrian Jones, stated that Cardiff Bay was a contender for the "worst example of waterside regeneration in Britain". Specifically noting that the Empire Pool was replaced with a "trashy leisure complex" and that "It is not principally the buildings – poor as most are, sadly they represent the current British regeneration standard. No, it is the lack of any coherent urban structure, of real streets and worthwhile public spaces. In other words, it is the dumb plan." [6] 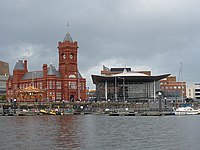 The Norwegian Church from the water

The bay has a mixture of old and new, the latter predominating. Noteworthy buildings include:

Appearances in the media

Doctor Who and Torchwood

Cardiff Bay was used as the high-tech urban setting for the Doctor Who episode "Boom Town" and the show's spinoff, Torchwood, whose makers deliberately avoided stereotypical portrayals of Wales in order to portray Cardiff as the modern urban centre it is today. In Torchwood, there is a giant secret base underneath the Bay, named "The Hub", from where the Torchwood team works. There is also a lift from the hub into the plaza with a perception filter making anyone who stands on the spot "not noticed".[9]

Roald Dahl Plass features prominently. The Doctor Who episode "The Runaway Bride" made use of office buildings in Cardiff Bay.[10]

Panorama of the Cardiff Bay in April 2010