Camden, familiarly known as Camden Town, is a town of Middlesex deep within the London conurbation, to the north-east of Regent's Park. It is well known for Camden Town Market.

At Camden Town a knot of railway lines, A-roads and a branch of the Grand Union Canal meet, creating a very busy urban centre.

Originally this area was part of the manor of Kentish Town and the parish of St Pancras, but it was laid out as a residential district from 1791. Later, Camden Town became an important location during the early development of the railways, which reinforced its position on the London canal network. The area's industrial economic base has been replaced by service industries such as retail, tourism and entertainment. The area now hosts street markets and music venues that are strongly associated with alternative culture.

Camden Town is named after Charles Pratt, 1st Earl Camden. His earldom was styled after his estate, Camden Place near Chislehurst in Kent, formerly owned by the historian William Camden.[1] The name, which appears on the Ordnance Survey map of 1822,[2] was later applied to the early-20th-century Camden Town Group of artists.[3] 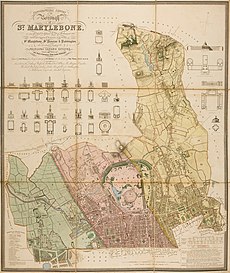 The ancient parishes, Paddington, St Marylebone and St Pancras, in 1834

The emergence of the industrial revolution in the 19th century meant Camden was the  North Western Railway's terminal stop in 1837. It was where goods were transported off the tracks and onto the roads of London by 250 000 workhorses.[4] The whole area was adapted to a transportation function: The Roundhouse (1846), Camden Lock and The Stables were examples of this.

Camden Town stands on land that was once the manor of Kentish Town. Sir Charles Pratt, a radical 18th-century lawyer and politician, acquired the manor through marriage. In 1791, he started granting leases for houses to be built in the manor. In 1816, the Regent's Canal was built through the area.[5] Up to at least the mid-20th century, Camden Town was considered an "unfashionable" locality.[6]

The Camden Markets, which started in 1973 and have grown since then, attract many visitors. In 1993 a terrorist bomb blast injured 18 people on Camden High Street. On 9 February 2008, Camden Canal market suffered a major fire, but there were no injuries.[7] It later reopened as Camden Lock Village,[8] until closed in 2015 for redevelopment. 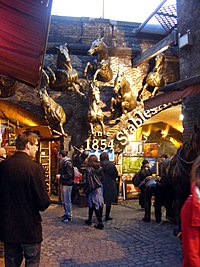 At the end of the 20th century, entertainment-related businesses began moving into the area, and a Holiday Inn was built abutting the canal. A number of retail and food chain outlets replaced independent shops, driven out by high rents and redevelopment. Restaurants with a variety of culinary traditions thrived, many of them near the markets, on Camden High Street and its side streets, Parkway, Chalk Farm Road, and Bayham Street. The plan to redevelop the historic Stables Market led to a steel and glass extension, built on the edges of the site in 2006, and increased the market's capacity.

Camden is well known for its markets. These date from 1974 or later, except for Inverness Street market, for over a century a small food market serving the local community,[9] though by 2013 all foodstuff and produce stalls had gone and only touristy stalls remained.

Camden Lock Market proper started in a former timber yard in 1973, and is now surrounded by five more markets: Buck Street market, Stables market, Camden Lock Village, and an indoor market in the Electric Ballroom. The markets are a major tourist attraction at weekends, selling goods of all types, including fashion, lifestyle, books, food, junk/antiques and more bizarre items; they and the surrounding shops are popular with young people, in particular, those searching for "alternative" clothing. While originally open on Sundays only,[10] market activity later extended throughout the week, though concentrating on weekends.

A warm summer day at the Camden Lock

Regent's Canal runs through the north end of Camden Town. 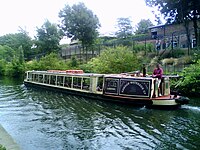 Canal boat trips along the canal from Camden Lock are popular, particularly in summer. Many of the handrails by the bridges show deep marks worn by the towropes by which horses pulled canal barges until the 1950s, and it is still possible to see ramps on the canal bank designed to assist horses that fell in the canal after being startled by the noise of a train. A regular waterbus service operates along the Regent's Canal from Camden Lock. Boats depart every hour during the summer, heading westward around Regent's Park, calling at London Zoo and on towards Maida Vale. Sightseeing narrow-boat trips run from Camden Lock to Little Venice.

The towpath is a pedestrian and cycle route which runs continuously from Little Venice through Camden Lock to the Islington Tunnel.[11]

To the north of Camden Town station and running along the canal is a modern pop art complex designed by Terry Farrell as the studios of the former TV-am, now used by MTV[5] but retaining TV-am's eggcup sculptures along the roof line. Associated Press Television News has its head office in a former gin warehouse near Camden Lock called "The Interchange".

In film and television