Calstock is a large village in south-eastern Cornwall, on the border with Devon. The village stands on the River Tamar six miles south-west of Tavistock (across the river in Devon). The parish had a population of 6,095 in the 2001 census. It is best known for the Calstock Viaduct which soars high across the Tamar here bearing the railway between Devon and Cornwall. It is also a village wedded to the tidal river and boats take to the waters, more usually these days taking holiday-makers in season up and down the river, or fishing.

Calstock village is within the “Tamar Valley AONB”, is overlooked by Cotehele house and gardens, and lies on the scenic Tamar Valley railway. Calstock railway station opened on 2 March 1908.

The western tower is of three stages and of granite. At the east end of each aisle are rectangular windows of three lights. The Edgcumbe Chapel contains two monuments of the late 17th century: to Piers Edgcumbe (1666) and to Jemima, Countess of Sandwich (1674). The rectory is the work of Decimus Burton, 1853-54.[1]

There is evidence of settlement in Calstock from Roman, or pre-Roman times, settlers attracted by the rich source of minerals, such as tin, in the area. A Roman fort, only the third known in Cornwall, was discovered next to the church in 2008.[2]

In Anglo-Saxon times Calstock was in the Kingdom of Cornwall until the latter was absorbed into Wessex in the ninth century. A battle between the West Saxons and Cornish was fought near Calstock in 838. Following the Norman Conquest, Calstock manor was recorded in the Domesday Book. In the 14th century, the manor became part of the Duchy of Cornwall: one of the 17 ‘’Antiqua maneria’’.

Mining was important in Calstock from Mediæval times, with the Duchy mining silver. The industry was booming in the late 19th century and the discovery of copper, and coupled with nearby granite quarrying made Calstock a busy port. The rapid population boom due to the growth of industry led, in 1849, to an outbreak of cholera. The industry declined in the early 20th century due to foreign competition, and now only the ruined pump houses that dot the landscape remain.

The Tamar is navigable to boats past Calstock some three miles upstream to Morwellham Quay with some 10 ft or even 20 ft of water at extreme spring tides. Calstock Quay was once important for transporting goods, and in the Victorian era when steamers brought tourists to the village, Calstock was visited by Queen Victoria and Prince Albert in 1846. The importance of the river as a transport route declined with the construction of the 14-mile Tamar Valley railway at the start of the 20th century. The village is still dominated by the railway's viaduct, which was first crossed by truck on 8 August 1907 and first used by passengers on 2 March 1908. 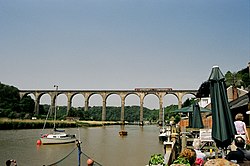 The viaduct and the Tamar Inn