The County of Caithness is the land beyond the Highlands. It is a triangular shire at the north-eastern tip of Great Britain, bounded to the north and the east by the sea and to the west by Sutherland.

Caithness is the northernmost county in mainland Great Britain, the northernmost extremity being Dunnet Head, while nearby John o' Groats at the north-easterly corner of the shire and of Great Britain is the end of the traditional measure of the length of Britain: Land's End to John o' Groats, which two points lie 603 miles apart as the crow flies, and some 874 miles by road. North of Caithness across the Pentland Firth lie the islands of Orkney. The Pentland Firth island of Stroma is within Caithness too.

The land of Caithness is low-lying, in remarkable contrast to the mountainous shires elsewhere in the north. It is largely level county of wind-blown moors and seascape. Inland, the Flow Country stretches over 1,540 square miles of Caithness and Sutherland, a vast blanket bog moorland marked by countless peat lakes.

Caithness is bounded on two sides by the sea and on the third by Sutherland, the only shire with which it has a border. The landward border follows a watershed. It is crossed by just two roads; the A9 which runs along the northern coast of Great Britain and the A836 which wanders southward toward Inverness. One railway line reaches Caithness too; the Far North Line. The Pentland Firth is crossed by ferries to Orkney sailing from Scrabster near Thurso and in season from John O'Groats. A single airport at Wick also serves the county.

The highest point in the county is Morven (ND005285), at 2,316 feet, on the border of Sutherland. Its northernmost is the island of Stroma, though its northernmost mainland point, and the northernmost point of Great Britain is Dunnet Head and its northern edge, Easter Head.

Plantlife chose the Scots Primrose as Caithness's county flower in 2002, a flower which blooms to the north coast.

Caithness extends about 30 miles north-south and about 30 miles east-west. Until the latter part of the 20th century when large areas were planted in conifers, the county's level profile was rendered still more striking by the almost total absence of forest. 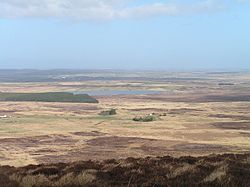 The underlying geology of most of Caithness is old red sandstone to an estimated depth of over 13,000 feet. This consists of the cemented sediments of Lake Orcadie, which is believed to have stretched from Shetland to the Grampian hills during the Devonian period, about 370 million years ago. Fossilised fish and plant remains are found between the layers of sediment. Older metamorphic (granite) rock is apparent in the Scaraben and Ord area, in the relatively high southwest area of the county. Caithness's highest point, Morven at 2,316 feet, is in this area.

Caithness is a land of open, rolling farmland, moorland and scattered settlements. The county is fringed to the north and east by dramatic coastal scenery and is home to large, internationally-important colonies of seabirds. The surrounding waters of the Pentland Firth and the North Sea hold a great diversity of marine life. Away from the coast, the landscape is dominated by open moorland and blanket bog known as the Flow Country which is the largest expanse of blanket bog in Europe, extending into Sutherland. This is divided up along the straths (river valleys) by more fertile farm and croft land.

Name of the county

The name of Caithness in its current guise is from the Norse name recorded in the twelfth century as Catanes ("Cats' headlead"). The Cat element is however much older, from a Pictish tribe of the far northeast of Britain whose land, one of the seven Pictish kingdoms, was known as Cait.

The Gaelic name given to the shire by its neighbours is Gallaibh, means among the foreigners, referring to the Norse whose settlers held this land. However the Gaelic for Sutherland is Cataibh, from the Pictish Cait'. The Old Irish name for Shetland in turn is Na h-Innse Cait; the Isles of Cait. 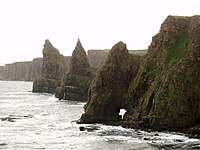 The underlying geology, harsh climate and long history of human occupation have shaped all shaped the land. Caithness has a rich and distinctive natural heritage with a diverse landscape.

The Flow Country covers much of the landscape, a low-lying blanket bog of peat moorland marked with countless dark lochans.

The county's wildlife includes the commonplace and the exotic, providing a safe home for beasts and birds once common but now become rare elsewhere. Amongst these are waders, water voles and flocks of over-wintering birds.

Many rare mammals, birds and fish have been sighted or caught in and around Caithness waters. Harbour porpoises, numerous species of dolphin (as Risso's dolphins, bottle-nosed dolphins, common dolphins, Atlantic white-sided dolphins and white-beaked dolphins), minke whales and long-finned pilot whales swim in its waters and are regularly seen from the shore and boats. Both grey seals and common seals come close to the shore to feed, rest and raise their pups, and otters can be seen close to river mouths in some of the quieter locations.

Caithness was heavily settled by the Norse in the early Middle Ages, along with Orkney and Shetland, and they appear to have driven out or subsumed the native people who preceded them. For much of this period Caithness formed part of the domains of the Earl of Orkney. According to the Orkneyinga Saga, the Earls strove with the Kings of the Scots who wished to assert if not rule then feudal overlordship of Caithness.

After Caithness was absorbed by Scotland, it was assigned to the shire of Inverness, but gradually gained independence: in 1455 the Earl of Caithness gained a grant of the justiciary and sheriffdom of the area from the Sheriff of Inverness. In 1503 an Act of the Parliament of Scotland confirmed the separate jurisdiction, with Dornoch and Wick named as burghs in which the sheriff of Caithness was to hold courts. The area of the sheriffdom was declared to be identical to that of the Diocese of Caithness. The Sheriff of Inverness still retained power over important legal cases, however until 1641, in which year parliament declared Wick the head burgh of the shire of Caithness and the Earl of Caithness became the heritable sheriff.[1] The heritable jurisdictions were at last abolished in 1747.

The Caithness landscape is rich with the remains of pre-historic occupation. These include the Grey Cairns of Camster, the Stone Lud, the Hill O Many Stanes, a complex of sites around Loch Yarrows and over 100 brochs. A prehistoric souterrain structure at Caithness has been likened to discoveries at Midgarth and on Shapinsay.[2]

It is believed that when the Norsemen arrived, probably in the 10th century, the county was Pictish. The Pictish kingdom of Cait existed in these lands and gave its name to Caithness.

Norwegian settlers arrived in heavy numbers probably in the tenth century and established themselves around the coast. On the south side of Caithness, they extended their settlements as far as Berriedale. Many of the place names of Caithness are Norse in origin and so it is said several family names in the county.

The Norse left numerous coastal castles, now mostly in ruins.[3] For a long time sovereignty over Caithness was disputed between Scotland and the Norwegian Earldom of Orkney. Around 1196, Earl Harald Maddadsson agreed to pay a monetary tribute for Caithness to William I. Norway recognized Caithness as Scottish at the Treaty of Perth in 1266.

At the beginning of recorded history Caithness is believed to have been inhabited by the Picts, whose language Pictish language is thought to have been related to the languages spoken by the Britons to the south.

The Norn language, Old Norwegian, was introduced to Caithness, Orkney and Shetland by the Norse occupation which is generally proposed to be c. AD 800.[4] Although little is known of the Norn language, some of this linguistic influence still exists in some parts of the county, particularly in place names. Norn continued to be spoken in Caithness until perhaps the fifteenth century[5] and lingered until the late 18th century in Orkney and Shetland.

The Scots language, a variant of English and which the Scots themselves were in past ages wont to call English, began supplanting Norn in the early 14th century at the time of the Wars of Scottish Independence.[6] The emergent Northern Scots dialect became influenced by both Gaelic and Norn,[7] and is generally spoken in the low-lying land to the east of a line drawn from Clyth Ness to some 4 miles west of Thurso.[8] The dialect of Scots spoken the neighbourhood of John o' Groats resembles that of Orkney to some extent.

Gaelic-speakers spread north during the early Middle Ages; neighbouring Sutherland became Gaelic-speaking and its place-names today are a mixture of Gaelic and Norn. The Gaels' influence in Caithness seems limited but not insignificant particularly from the 12th century onwards.[9] In 1706 it was observed that:

. . . if ye suppose a Parallel to the hypotenuse drawn from Week to Thurso, these on the Eastside of it speak most part English, and those on the Westside Irish; and the last have Ministers to preach to them in both languages.

Since the 17th century standard English has increasingly been replacing Scots.

Today the local council governs a vast area of the Highlands and Caithness with it and the council's bilingual road sign policy has led to some disquiet when applied to Caithness.[10]

Things to see in Caithness 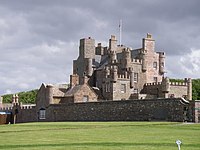 The Castle of Mey