Difference between revisions of "Céide Fields" 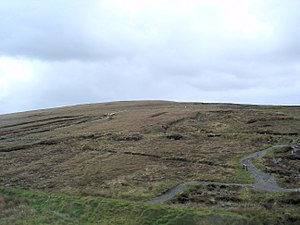 The Céide Fields are an archaeological site on the north County Mayo coast, about five miles north-west of Ballycastle. The site is the most extensive Neolithic site in Ireland and contains the oldest known field systems in the world.[1][2] Using various dating methods, it was discovered that the creation and development of the Céide Fields goes back some five and a half thousand years (~3500 BCE).[3] The name Chéide is from the Irish language meaning 'flat-topped hill;.[4][5][6]

The site is in UNESCO's tentative list to gain World Heritage status. [7]

The discovery of the Céide Fields originally began in the 1930s when a schoolteacher, Patrick Caulfield, noticed piles of rocks which were uncovered as he cut away some peat for fuel. In these piles of rock he saw a design that could not have been haphazard; Caulfield noted that the rocks must have been placed there by people, because their configuration was clearly unnatural and deliberate. Furthermore, the rocks were positioned below the bog, which meant they were there before the bog developed, implying a very ancient origin.

The unravelling of the true significance of this discovery did not begin for another forty years when Patrick's son, Seamus, having studied archaeology, began to investigate further. Investigations revealed a complex of fields, houses and megalithic tombs concealed by the growth of blanket bogs over the course of many centuries.[8][9] 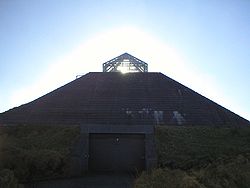 In order to preserve the site and ensure the continuation of research, a simple method was used to explore the fields. This involved the location and mapping of these hidden walls by probing with iron rods with cross handles. (These were locally available as they had been previously used to probe for prehistoric fallen timber below the bog, subsequently dug up and used in this treeless landscape. The fallen trees revealed their location as surface bare patches during frosty weather. Probes were used to locate each end of the timber and, if the vibrations from the probe at one end being struck could be felt at the probe at the other end, the piece of timber had not shattered in falling and so was worth excavating.) The ensuing excavation of habitation sites and tombs reveals the way of life of people living 200 generations ago. They were a large community of farmers who cleared hundreds of acres of pine forests, pollen from pine trees being present in the peat. Their main economy was cattle rearing but among them were also craftspeople and builders in both wood and stone.

It was discovered that these people arrived in a land with a substantial forest canopy. This was cleared to provide access to arable land and to provide building material and firewood. This clearance continued onward and outward away from the area in continuing procurement of firewood. 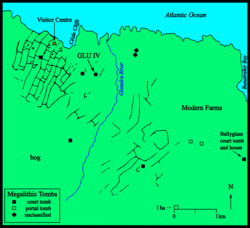 The climate at the time was much warmer, leading to almost year-round growth potential. Samples taken from the remains of trees found in the bog provide ample evidence of this.

For a while, these people prospered, but some changes led to the development of raised bogs and the transformation of the arable land into barren and unusable land. It is speculated that the removal of the tree canopy helped cause this change. Where tree cover is substantial, most of the rain never reaches the ground. Instead it stays on the top of the canopy and is either absorbed or evaporates back into the atmosphere. With the removal of the forests, all of the rain reached the ground and, it is believed, leached the earth of its nutrients. This idea is supported by the presence of an ironpan in the subsoil over the area of the Céide Fields.