The town was a major centre for the textile industry in County Donegal from the 19th century until the mid-2000s (decade).

On the northern bank of the River Crana as it enters Lough Swilly sits the three-story O'Doherty's Keep, which is the only surviving part of an original 14th-century Norman castle. The first two levels of the keep were built after 1333.[3][4] In 1601 the O'Doherty's Keep was described as being a small, two-story castle, inhabited by Conor McGarret O'Doherty. In 1602 the third level was added and it was upgraded by Hugh Boy O'Doherty as an intended base for Spanish military aid that hoped to land at Inch.[4]

The keep was burned by Crown forces in 1608 in reprisal for the rebellion of Sir Cahir O'Doherty, who had sacked and razed the city of Derry. After Sir Cahir O'Doherty was killed at the Battle of Kilmacrennan, he was attaindered and his land seized. The keep was granted to Sir Arthur Chichester, who then leased it to Henry Vaughan, where it was repaired and lived in by the Vaughan family until 1718.[5]

In 1718, Buncrana Castle was built by George Vaughan, it was one of the first big manor houses built in Inishowen, and stone was taken from the bawn, or defensive wall, surrounding O'Doherty's Keep to build it. It was erected on the original site of Buncrana, which had grown up in the shadow of the keep. Vaughan moved the town to its present location, where he founded the current main street and built the Castle Bridge (a six-arched stone single lane bridge) across the River Crana leading to his Castle.[6]

During the 1798 Rebellion, Theobald Wolfe Tone was held in Buncrana Castle when he was captured after the British/French naval battle off the coast of Donegal, before being taken to Londonderry and then subsequently to Dublin. On 18 May 1812, Isaac Todd bought the entire town of Buncrana, also the townlands of Tullydish, Adaravan and Ballymacarry, at the Court of Chancery on behalf of the trustees of the Marquess of Donegall. His nephews inherited the castles, and they later became known as the Thornton-Todds. The castle remains as a private home today. In the forecourt there is a memorial rock in honour of Sir Cahir O'Doherty, and a plaque dedicated to Wolfe Tone.[7]

When John Newton and his shipmates on The Greyhound found a haven in Lough Swilly on 8 April 1748 after a devastating Atlantic storm, he saw his survival as divine intervention, the answer to prayer. The refuge of the Swilly and Buncrana area laid a spiritual foundation for a reformed later life. In 1764 he became a Church of England clergyman and subsequently, as curate at Olney in Buckinghamshire, an anti-slavery activist and renowned hymnist famous for writing “Amazing Grace”.[8]

One of the oldest remaining inhabited residences in Buncrana is a Georgian property called Westbrook House, situated at the entrance to Swan Park just north of the town center of Buncrana. The house was built in 1807 by Judge Wilson, who also built the single-arch stone bridge (referred to as Wilson's Bridge) leading to the house and the entrance to Swan Park. 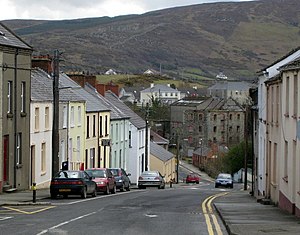 In October 1905, Buncrana was the first town in County Donegal to receive electricity. It was generated at Swan Mill which continued to provide electricity for the town until September 1954 when Buncrana was brought under the ESB Rural Electrification Scheme.[6] 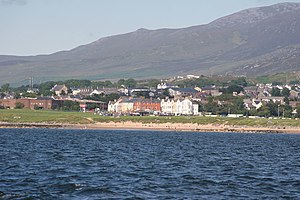 Buncrana as seen from Lough Swilly

Buncrana is located on the eastern shore of Lough Swilly in north County Donegal. The main urban area of the town is situated between the Crana River to the north and the Mill River to the south. The principle street follows a rough north-south route and is divided into the Upper and Lower Main Street by the Market Square. The Main Street has a one-way traffic system. The River Crana is crossed by three bridges: Castle Bridge (which gives vehicular access to Buncrana Castle and pedestrian access to Swan Park), Westbrook Bridge (officially, Wilson's Bridge) and Cockhill Bridge. The Mill River, south of the town, is crossed by two bridges: Victoria Bridge (known locally as the Iron Bridge) which is the main point of access to the town and the Mill Bridge which is at the end of the Mill Brae road at the south end of the town.

The underlying bedrock includes Fahan slate formation. The river valley of the Mill River flows over a narrow band of Culdaff limestone with a sill of metadolerite along the rivers southern embankment extending from the estuarine zone inland. Sandy gravels and clonglomerates overlie bedrock. The geology was formed during the Lower Carboniferous Period. The local soils throughout the area range from shallow to moderate depth peaty podzols and established podzolics types with a moderate percentage of loam and sandy clays.

Buncrana railway station opened on 9 September 1864, was closed for passenger traffic on 6 September 1948, and finally closed altogether on 10 August 1953.[9]

Buncrana is connected to the rest of the national road network via a regional road, the R238. This connects it to the N13, the national primary road that connects Letterkenny and Londonderry (it becomes the A2 when it crosses into County Londonderry). The town is considered the gateway to Inishowen and lies on the "Inishowen 100", an approximate 100-mile route around the peninsula that passes various scenic sites.

Hourly bus services are provided from Londonderry to Buncrana and vice versa. 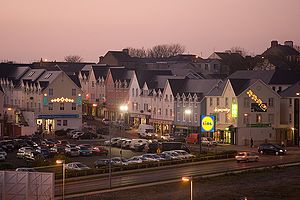 Ardaravan Square in Buncrana at twilight

Buncrana has a relatively strong tourism industry, and it is one of the most popular holiday destinations in the north-west of Ireland. This is possibly due to its close proximity to Derry, and also for its wide range of retail stores. It also has well-developed tourist facilities, and it serves as the main town on the Inishowen peninsula, which also helps with sustaining the tourism industry in the town.[11]

Lisfannon beach, a Blue Flag beach, sits on the shores of Lough Swilly just south of the town, and is an important recreational beach that is popular with locals and day-trippers from Londonderry.[12] 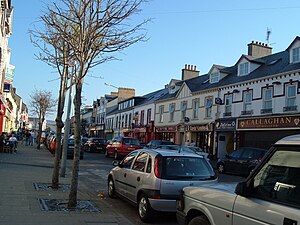 Buncrana is home to many sports clubs, including clubs for association football, Gaelic football and hurling, athletics and watersports. Football clubs based around Buncrana include Buncrana Hearts F.C., Cockhill Celtic F.C. and Illies Celtic. Buncrana Hearts and Illies Celtic play in the Inishowen Football League and Cockhill Celtic play in the Ulster Senior League.

Gaelic Football is also a popular sport in Buncrana, and the club caters for teams from Under-8 level right up to Senior level. 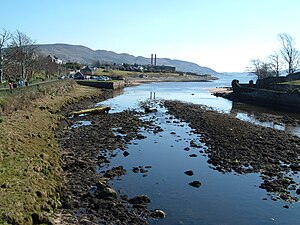 Buncrana has a vibrant music scene with a host of local pubs or bars having live music most nights of the week. Roddens Bar, O Flaherty's and The Drift Inn are always good for a mix of traditional, rock and country music. The annual Buncrana Music & Arts Festival takes place every 23 July in the town.[15]

The Buncrana Music and Arts festival returned to the town in 2010, after a five-year absence. The festival included successful performances from The Coronas, The Undertones and Altan. It has recurred each year since.

Buncrana is also famous for producing traditional music artists. Dinny McLaughlin, Paul McClure, Ciaran Tourish and Tom Byrne are all natives of the town, and have performed to critical acclaim all over the country. 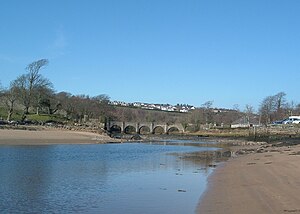