Difference between revisions of "Bryanston School"

Bryanston School is a co-educational independent school for day and boarding pupils, located next to the village of Bryanston, and near the town of Blandford Forum, in Dorset. The school was founded in 1928, but its main building is older: it occupies a palatial country house designed and built in 1889–94 by Richard Norman Shaw, the champion of a renewed academic tradition, for Viscount Portman, the owner of large tracts in the West End of London, in the early version of neo-Georgian style[1] that Sir Edwin Lutyens called "Wrenaissance", to replace an earlier house, and is set in 400 acres.

Bryanston is a member of the Headmasters' and Headmistresses' Conference and the Eton Group.[2] It has a reputation as a liberal and artistic school using some ideas of the 'Dalton Plan'.[3]

Bryanston was founded in 1928 by a young schoolmaster from Australia named J. G. Jeffreys. Armed only with his confidence and enthusiasm, he gained financial support for the school during a period of severe economic instability with financial backing from Anthony Ashley-Cooper, 9th Earl of Shaftesbury, he paid £35,000 for the Bryanston House and its 450 acres of immediate grounds.

The school occupies a palatial country house designed and built in 1889–1894 by Richard Norman Shaw and modelled on the chateau at Menars in the Loire valley. Shaw designed the house for Viscount Portman to replace an earlier one. The building and estate was the biggest in Dorset and the last of the grand stately homes to be built in Britain. The home had been occupied by the Portman family for 30 years at the time of its sale, however, death duties made it impossible for the 4th Lord Portman to hold on to his family estate.[4]

There were just seven teachers and 23 boys of various ages in the first term. Jeffreys innovated whilst respecting good traditions, reflected in his choice of school motto, Et Nova Et Vetera. His was the first English school to adopt the Dalton Plan, its combination of the new and the old being of particular appeal. The system was flexible enough to offer a combination of lessons in the classroom and time for assignment work in subject rooms, which gave the students freedom to decide which pieces of academic work to focus their attention. Students are required to keep a daily record on a chart showing their use of working and leisure time, meeting with their tutors on a weekly basis to ensure effective monitoring of their progress.

During the mid-1930s, Bryanston School was the location of Anglo-German youth camps where the Hitler Youth and Boy Scouts tried to develop links.[5]

Bryanston is a member of the Headmasters' and Headmistresses' Conference and the Eton Group. It has a reputation as a liberal and artistic school. The principles of the Dalton Plan are still in place today and remain central to the school's success. 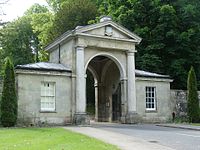 In 2014, the school opened a new music building, the Tom Wheare Music School, designed by Hopkins Architects and named after a headteacher of Bryanston. The 300-seat concert hall was named after conductor Sir Mark Elder, who is a former pupil.[6] The interior of the building won a 2015 Wood Award.[7]