Botany Bay is a hamlet in northern Middlesex close to the border with Hertfordshire. It sits on the northern outskirts of the Greater London conurbation. It has a population close to 200. The hamlet is located in the centre of Enfield Chase, on the Ridgeway not far from the M25 motorway, and is about a mile from the railway station at Crews Hill. It came into being when the Chase was enclosed in 1777[1] and was recorded as Botany Bay on C.G. Greenwood's map of 1819. Its remoteness from other settlements probably explains its name, as a facetious reference to Botany Bay in Australia.[2] As with other places called Botany Bay, an alternative explanation is that these were originally staging points for convicts destined for transportation. 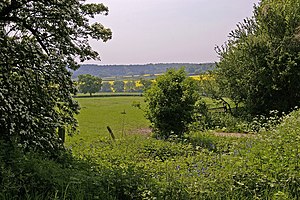 The village has a public house, a farm with shop and Botany Bay Cricket Club which is housed in East Lodge Lane and shares its facilities with Botany Bay Petanque Club, Old Garchonians Football Club and is the home of the Bay Jazz Club, Googlies Jazz Supper Club and Bigboppas Rock n Roll Club. [3]

This Middlesex article is a stub: help to improve Wikishire by building it up.
Retrieved from "https://wikishire.co.uk/w/index.php?title=Botany_Bay,_Middlesex&oldid=36581"
Categories: