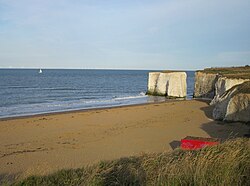 Looking southeast across the bay. The Thanet Wind Farm can be seen on the horizon. 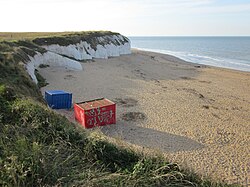 Looking northwest across the bay.

Botany Bay is a bay in Broadstairs on the north-eastern Kent coast.

Botany Bay is the northernmost of seven bays in Broadstairs.[1][2] It features chalk cliffs and is a popular tourist location.[3] Bathing is reportedly safe for swimming, surfing, and kayaking, and lifeguards are on duty.[4]

Botany Bay is a popular film location, having been used by productions such as BBC's D- Day: The Last Heroes,[5] Tamil action drama Thaandavam,[6] Sky Atlantic comedy Hunderby,[7] BBC drama True Love [8] as well as music videos for Bat For Lashes, Bebe Black, Shawn Mendes' song "There's Nothing Holdin' Me Back", and commercials for Land Rover, Sainsburys and Natwest and photoshoots for many fashion editorials. "Dress Code"[9] an episode from the web series, The Mute Series, was also shot there.

This Kent article is a stub: help to improve Wikishire by building it up.
Retrieved from "https://wikishire.co.uk/w/index.php?title=Botany_Bay,_Kent&oldid=60670"
Categories: