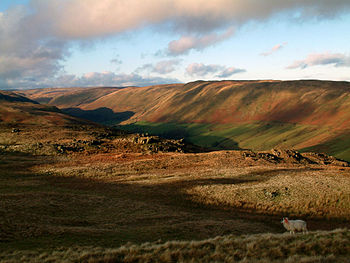 Westmorland Borrowdale from the slopes of Grayrigg Forest

The valley straddles the eastern border of the Lake District National Park.

The valley carries Borrow Beck for seven miles, from Borrowdale Hole, through Borrowdale Moss to End of Borrowdale, crossing the A6 road at High Borrow Bridge and reaching the River Lune at Low Borrow Bridge, site of a Roman fort, and where the original bridge has been supplemented by a new bridge for the A685 road, twin viaducts for the M6 motorway, and the West Coast Main Line railway.

The upper segment, above High Borrow Bridge, is very remote; the lower segment carries a bridleway along its length, and has easy parking at the eastern end just off the A685, but remains quiet even in the high season.