Difference between revisions of "Bodleian Library"

The Bodleian Library is the main research library of the University of Oxford, and is one of the oldest libraries in Europe. With over 12 million items, it is the largest library in Britain after the British Library.[1]

Under the Legal Deposit Libraries Act 2003, the Bodleian is one of six legal deposit libraries for works published in the United Kingdom,[2][3] and under Irish law it is entitled to request a copy of each book published in the Republic of Ireland.[4] Known to Oxford scholars as "Bodley" or "the Bod", it operates principally as a reference library and, in general, documents may not be removed from the reading rooms.

In 2000, a number of libraries within the University of Oxford were brought together for administrative purposes under the aegis of what was initially known as Oxford University Library Services (OULS), and since 2010 as 'the Bodleian Libraries', of which the Bodleian Library itself is the largest component.

All colleges of the University of Oxford have their own libraries, which in a number of cases were established well before the foundation of the Bodleian, and all of which remain entirely independent of the Bodleian. They do, however, participate in the Oxford Libraries Information System, the Bodleian Libraries' online union catalogue. Much of the library's archives were digitized and put online for public access in 2015.[5]

The Bodleian Library occupies a group of five buildings near Broad Street: the 15th-century Duke Humfrey's Library, the 17th-century Schools Quadrangle, the 18th-century Clarendon Building and Radcliffe Camera, and the 20th- and 21st-century Weston Library. Since the 19th century a number of underground stores have been built, while the principal off-site storage area is located at South Marston on the edge of Swindon.

Before being granted access to the library, new readers are required to agree to a formal declaration. This declaration was traditionally an oral oath, but is now usually made by signing a letter to a similar effect. Ceremonies in which readers recite the declaration are still performed for those who wish to take them; these occur primarily at the start of the University's Michaelmas term. External readers (those not attached to the University) are still required to recite the declaration orally prior to admission. The Bodleian Admissions Office has amassed a large collection of translations of the declaration – covering over one hundred different languages as of spring 2017[6] – allowing those who are not native English speakers to recite it in their first language. The English text of the declaration is as follows:

I hereby undertake not to remove from the Library, nor to mark, deface, or injure in any way, any volume, document or other object belonging to it or in its custody; not to bring into the Library, or kindle therein, any fire or flame, and not to smoke in the Library; and I promise to obey all rules of the Library.

This is a translation of the traditional Latin oath (the original version of which did not forbid tobacco smoking, though libraries were then unheated because fires were so hazardous): 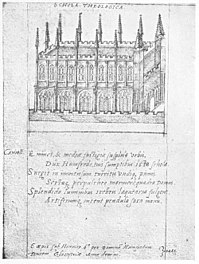 The library in 1566, drawn by John Bereblock

Whilst the Bodleian Library, in its current incarnation, has a continuous history dating back to 1602, its roots date back even further. The first purpose-built library known to have existed in Oxford was founded in the 14th century under the will of Thomas Cobham, Bishop of Worcester (d. 1327). This small collection of chained books was situated above the north side of the University Church of St Mary the Virgin on the High Street.[7][8] This collection continued to grow steadily, but when Humphrey, Duke of Gloucester (brother of King Henry V) donated a great collection of manuscripts between 1435 and 1437, the space was deemed insufficient and a larger building was required. A suitable room was finally built above the Divinity School, and completed in 1488. This room continues to be known as Duke Humfrey's Library.[9] After 1488, the university stopped spending money on the library's upkeep and acquisitions, and manuscripts began to go unreturned to the library.[10]

Sir Thomas Bodley and the re-founding of the University Library

The library went through a period of decline in the late 16th century: the library's furniture was sold, and only three of the original books belonging to Duke Humphrey remained in the collection.[9] During the reign of Edward VI, there was a purge of "superstitious" (Roman Catholic-related) manuscripts.[10] It was not until 1598 that the library began to thrive once more,[11] when Thomas Bodley (a former fellow of Merton College, who had recently married a wealthy widow[12]) wrote to the Vice Chancellor of the University offering to support the development of the library: "where there hath bin hertofore a publike library in Oxford: which you know is apparent by the rome it self remayning, and by your statute records I will take the charge and cost upon me, to reduce it again to his former use."[11] Six of the Oxford University dons were tasked with helping Bodley in refitting the library in March 1598.[13] Duke Humfrey's Library was refitted, and Bodley donated a number of his own books to furnish it. The library was formally re-opened on 8 November 1602 under the name "Bodleian Library" (officially Bodley's Library).[9] There were around two thousand books in the library at this time, with an ornate Benefactor's Register displayed prominently, to encourage donations. Early benefactors were motivated by the recent memory of the Reformation to donate books in the hopes that they would be kept safe.[14]

Bodley's collecting interests were varied; according to the library's historian Ian Philip, as early as June 1603 he was attempting to source manuscripts from Turkey, and it was during "the same year that the first Chinese book was acquired",[15] despite no-one at Oxford being able to understand them at that time.[16] In 1605, Francis Bacon gave the library a copy of The Advancement of Learning and described the Bodleian as "an Ark to save learning from deluge".[17] At this time, there were few books written in English held in the library, partially because academic work was not done in English.[16] Thomas James suggested that Bodley should ask the Stationers' Company to provide a copy of all books printed to the Bodleian[18] and in 1610 Bodley made an agreement with the company to put a copy of every book registered with them in the library.[19] The Bodleian collection grew so fast that the building was expanded between 1610–1612 (known as the Arts End),[19] and again in 1634–1637. When John Selden died in 1654, he left the Bodleian his large collection of books and manuscripts. The later addition to Duke Humfrey's Library continues to be known as the "Selden End".

Schools Quadrangle and Tower of the Five Orders

By the time of Bodley's death in 1613, his planned further expansion to the library was just starting.[21] The Schools Quadrangle (sometimes referred to as the "Old Schools Quadrangle", or the "Old Library") was built between 1613 and 1619 by adding three wings to the Proscholium and Arts End. Its tower forms the main entrance to the library, and is known as the Tower of the Five Orders. The Tower is so named because it is ornamented, in ascending order, with the columns of each of the five orders of classical architecture: Tuscan, Doric, Ionic, Corinthian and Composite.[22]

The three wings of the quadrangle have three floors: rooms on the ground and upper floors of the quadrangle (excluding Duke Humfrey's Library, above the Divinity School) were originally used as lecture space and an art gallery. The lecture rooms are still indicated by the inscriptions over the doors. As the library's collections expanded, these rooms were gradually taken over, the University lectures and examinations were moved into the newly created University Schools building.[21] The art collection was transferred to the Ashmolean. One of the schools was used to host exhibitions of the library's treasures, now moved to the renovated Weston Library, whilst the others are used as offices and meeting rooms for the library administrators, a readers' common room, and a small gift shop. 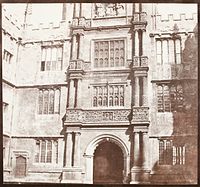 The Tower of the Five Orders photographed by Henry Fox Talbot, c. 1843/46

The agreement with the Stationers' Company meant that the growth of stock was constant and there were also a number of large bequests and acquisitions for other reasons. Until the establishment of the British Museum in 1753 the Bodleian was effectively the national library of England. By then the Bodleian, Cambridge University Library and the Royal Library were the most extensive book collections in England and Wales.

The astronomer Thomas Hornsby observed the transit of Venus from the Tower of the Five Orders in 1769.[23]

A large collection of mediæval Italian manuscripts was bought from Matteo Luigi Canonici in 1817.[24] In 1829, the library bought the collection of Rabbi David Oppenheim, adding to its Hebrew collection.[25]

By the late 19th century, further growth of the library demanded more expansion space. In 1860, the library was allowed to take over the adjacent building, known as the Radcliffe Camera. In 1861, the library's medical and scientific collections were transferred to the Radcliffe Science Library, which had been built farther north next to the University Museum.

The Clarendon Building was designed by Nicholas Hawksmoor and built between 1711 and 1715, originally to house the printing presses of the Oxford University Press. It was vacated by the Press in the early 19th century, and used by the university for administrative purposes. In 1975 it was handed over to the Bodleian Library, and now provides office and meeting space for senior members of staff.[26] 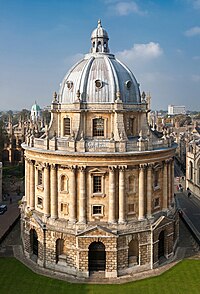 The Radcliffe Camera, from the University Church

Twentieth century and after

In 1907 the then head librarian, Nicholson, had begun a project to revise the catalogue of printed books.[27] In 1909, the Prime Minister of Nepal, Chandra Shum Shere, donated a large collection of Sanskrit literature to the library.[28]

In 1911, the Copyright Act[29] (now superseded by the Legal Deposit Libraries Act 2003) continued the Stationers' agreement by making the Bodleian one of the six (at that time) libraries covering legal deposit in the United Kingdom where a copy of each book copyrighted must be deposited.

Between 1909 and 1912, an underground bookstack was constructed beneath the Radcliffe Camera and Radcliffe Square.[30] In 1914, the total number of books in the library's collections breached the 1 million mark.[30] By 1915, only one quarter of the revised catalogue had been completed, a task made more difficult by library staff going into the war effort, either serving in the armed forces or by volunteering to serve in the hospitals. In July 1915 the most valuable books had been moved into a secret location due to a fear that Oxford would be bombed, and a volunteer fire brigade was trained and ready, but Oxford escaped the First World War without being bombed.[31] By the 1920s, the Library needed further expansion space, and in 1937 building work began on the New Bodleian building, opposite the Clarendon Building on the northeast corner of Broad Street.

The New Bodleian was designed by architect Sir Giles Gilbert Scott. Construction was completed in 1940. The building was of an innovative ziggurat design, with 60% of the bookstack below ground level.[32][33] A tunnel under Broad Street connects the Old and New Bodleian buildings, and contains a pedestrian walkway, a mechanical book conveyor and a pneumatic Lamson tube system which was used for book orders until an electronic automated stack request system was introduced in 2002. The Lamson tube system continued to be used by readers requesting manuscripts to be delivered to Duke Humfrey's Library until it was turned off in July 2009. In 2010, it was announced that the conveyor, which had been transporting books under Broad Street since the 1940s, would be shut down and dismantled on 20 August 2010.

Treasures of the library