Difference between revisions of "Bloxworth Heath" 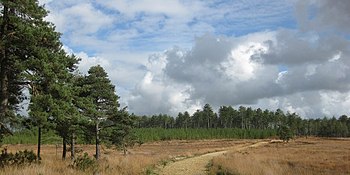 Bloxworth Heath is a four-square-mile area of heathland north of the town of Wareham in Dorset. It is part of Wareham Forest.

In the middle of Bloxworth Heath on a small knoll is the hillfort of Woolsbarrow. This is the highest point of the heath (at 220 feet above sea level) and offers good views over the area. There is a trig point at the top.

Bloxworth Heath is home to two very rare species of fauna: the ground crab spider, Xysticus luctator,[1] and the short-tailed blue butterfly (Cupido argiades), which was originally called the Bloxworth blue as this is where it was first recorded in 1885.[2]

Bloxworth Heath is a popular walking area and there are car parks at Sugar Hill in the centre of the area and at Stroud Bridge in the south, both on the minor road from Bere Regis to Wareham. There are numerous trails including the Hardy Way and Wareham Forest Way.