Bletchley is a constituent town of Milton Keynes in Buckinghamshire, one of the two old towns which were incorporated into the area of the New Town. Bletchley stands in the south-west of Milton Keynes. It is best known for Bletchley Park, the headquarters of Britain's Second World War codebreaking organisation, now a museum.

The town name is Old English and means Blæcca's clearing.[1] It was first recorded in manorial rolls in the 12th century as Bicchelai, then later as Blechelegh (13th century) and Blecheley (14th-16th centuries).[2]

Before the new town

Bletchley grew from an obscure hamlet on the road from Fenny Stratford to Buckingham with the arrival of the London and North Western Railway in 1845 and its subsequent junction with the Oxford-Cambridge Varsity Line shortly afterwards.[2] Bletchley grew rapidly to service the junction. Bletchley railway station was for many years an important node on the railway. It is now one of the five stations which serve Milton Keynes.

In the early 1960s, there was a further substantial expansion of the town, with people from London being relocated mainly to a London overspill estate to the south of Water Eaton. The population of the urban district increased from 5,500 in 1921 to 17,000 in 1961.

It was The Plan for Milton Keynes that would bring the most dramatic change to the future of Bletchley.

Bletchley was included in the "designated area" when the "New City" was proposed. Milton Keynes was founded in 1967.

Bletchley thrived in the early years of the growth of Milton Keynes, since it was the main shopping area. Bletchley centre was altered considerably when the Brunel Shopping Centre was built in the early 1970s, creating a new end to Queensway. (Previously, Queensway – formerly known as Bletchley Road – was a continuous run from Fenny Stratford to Old Bletchley). Bletchley's boom came to an end when the new Central Milton Keynes Shopping Centre was built and commercial Bletchley has declined as a retail destination in recent years.

For many years, Denbigh has been an important employment area. Perhaps its most famous enterprises seated here is the local football team, Milton Keynes Dons FC in Denbigh North, and also here are their former club sponsors Marshall Amplification, just across the old Watling Street in Denbigh West.

In 2005, large commercial developments occurred on the immediate outskirts of Bletchley, although still in the civil parish of "Bletchley and Fenny Stratford". The supermarket chain Asda-Wal-Mart and the Swedish furniture retailer IKEA built and opened large stores at Denbigh North, northeast of the town centre on Watling Street, and Tesco responded by expanding its store at the north-east edge of Bletchley/Fenny Stratford. Marks and Spencers have also announced plans to build a major development adjacent to the stadium. Whether or not these new developments accelerate the decline of the town centre remains to be seen.

Denbigh North became the home of the Milton Keynes Dons FC in the summer of 2007. 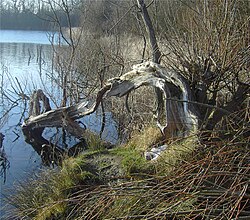 Part of the Blue Lagoon

The Blue Lagoon is a Local Nature Reserve, which attracts many local visitors every day. School children in Bletchley are often taken on trips to learn about the history of this site. 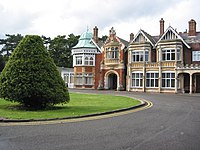 The main house at Bletchley Park

Within the West Bletchley parish, in the Church Green district, is Bletchley Park, which, during the Second World War, was home to the Government Code and Cypher School. The German Enigma code was cracked here by a dedicated team. Another cipher machine was solved with the aid of early computing devices, known as Colossus; the world's first electronic comuter.

The park is now a museum, although many areas of the park grounds have been sold off for housing development.

Both play at Manor Fields