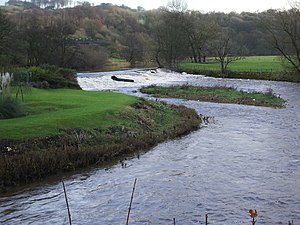 The River Calder in Whalley

Blackburnshire or the Hundred of Blackburn is one of the six hundreds of Lancashire. Its chief town, after which it is named, is Blackburn, in the north-west of the hundred. Blackburnshire covers an area of eastern Lancashire including much of the Ribble Valley and the towns of Bacup, Blackburn, Burnley and Hyndburn. It has a total population of 515,114 which ranks it third behind Salfordshire and West Derby in decreasing order of population.

Much of the area is hilly, bordering on the Pennines, with Pendle Hill in the midst of it, and until the Industrial Revolution it was sparsely populated. In the Middle Ages much of the hundred was within several important royal forests. In the 18th century, several towns in the area became industrialized and densely populated.

In Domesday Book of 1086, the Hundred of Blackburn was among the hundreds between the Rivers Ribble and Mersey, which area was called Inter Ripam et Mersam and listed alongside the Cheshire entries, although local historians conclude that this area cannot be said clearly to have then been considered part of Cheshire.[1][2][3]

At Domesday the area was predominantly woodland, and was known as the great forest of Blackburnshire. Domesday states the forest to be 6 leagues long and 4 leagues wide, which could be as much as 216 square miles. It also shows that the land had been held directly by King Edward.[4] After the Norman conquest, much of the great forest was established as royal hunting grounds, and was divided into the four forests of Accrington, Pendle, Trawden and Rossendale.[5]

In 1102, King Henry I granted the whole of Blackburnshire and part of Amounderness to Robert de Lacy, the Lord of Pontefract, while confirming his possession of the Lordship of Bowland.[6] These lands formed the basis of the Honour of Clitheroe. Subsequently most of the parish of Ribchester, except the township of Alston-with-Hothersall, and in the parish of Chipping, vills of Aighton and Dutton and parts edging the Forest of Bowland belonging ecclesiastically to the parish of Great Mitton were annexed to Blackburnshire.[5]

The separateness of the district was reinforced when it became a royal bailiwick in 1122. In 1182, it was included as part of Lancashire, apparently then newly created as a county.

By 1243 it is believed that there were 57 manors in the hundred: 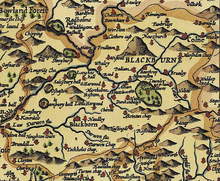 The early Diocese of Blackburn was unusual in having only two parishes, each covering a considerable but sparsely populated area. Whalley (now a much smaller civil parish) being the larger of the two, covering the east of the hundred, while Blackburn parish covers the west. Chipping and parts of Ribchester and Mitton were subsequently added to the hundred, but not to the diocese.[7]

Blackburnshire became a separate archdeaconry, splitting off from the archdeaconry of Manchester, in 1877.[8]