Bigbury is a small village in the south-west of Devon, standing on the hill above the tidal reach of the River Avon, and with lanes running down to the riverbank. The parish church, St Lawrence, stands at the top of the village. At the mouth of the river stands a larger, coastal village, Bigbury-on-Sea, just offshore of which is Burgh Island.

The village once had a pub, called the Royal Oak. It maintains a shop, the Bigbury Village Stores.

Nearby is Bigbury Golf Club, an 18-hole course off the B3392 midway between Bigbury and Bigbury-on-Sea. The parish includes both of these villages the eastern part of the small bay and beach at Challaborough. 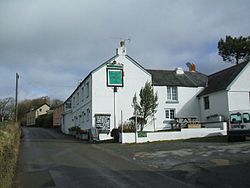 In the Domesday Book of 1086 the parish is recorded as Bicheberie as as belonging to a hundred named here as Alleriga.[1] When Alleriga Hundred was partitioned, Bigbury parish became part of Ermington Hundred.

Bigbury's church, dedicated to St Lawrence, is partly early 14th century and partly as rebuilt by J D Sedding in 1872. Apart from the western tower topped by a spire very little is obviously mediæval. The two monumental brasses are early 15th century. The font, sedilia and piscina are early 14th century, while the lectern and pulpit date from the following century. Both the lectern and pulpit were moved here from Ashburton church: the lectern is attributed to Thomas Prideaux and thought to be a donation of the Bishop of Exeter ca. 1510-15.[2]