Bickington is a village on the edge of the Dartmoor National Park in Devon, three miles north-east of Ashburton. According to the 2001 census it had a population of 311.

The village is about five miles west of Newton Abbot, on the River Lemon.

"BICKINGTON, a scattered village on the banks of the Lemon rivulet, and on the Exeter road, 3 miles N.E. of Ashburton, has in its parish 1375 acres and 374 inhabitants. The manor was dismembered many years ago, and the soil belongs to various freeholders. Here is a serge manufactory, employing 150 hands. Wrigwell estate has been held by the Bickford family about 600 years. The Church (St. James,) is an ancient structure, with a tower and three bells. The living is a perpetual curacy, annexed to the vicarage of Ashburton. The tithes were commuted in 1842, the vicarial for £110, and the rectorial for £115. The Dean and Chapter of Exeter are appropriators of the latter, and Mr. Richard Skinner is the lessee. Here is a small Wesleyan Chapel; and the poor have £2 from Plymouth Corporation, as a gift of Benjamin Baron. . . ."[1]

The Tews Lane Playing Fields, of seven and a half acres, have been enrolled as a Queen Elizabeth II Field. 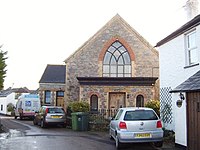 The parish church is St Mary The Virgin, and dates from the 15th century, though it may stand on an earlier site. It has a most unusual lychgate leading into the churchyard: the gate is through a house, and has a room over it.

There was formerly a Methodist chapel in the village, now converted into a private house.

This Devon article is a stub: help to improve Wikishire by building it up.
Retrieved from "https://wikishire.co.uk/w/index.php?title=Bickington&oldid=47584"
Categories: