The County of Berwick is a shire on the River Tweed. It is part of the "Middle Shires".

The name of Berwickshire is first found in the Charters of King David I[1] but it might have been founded earlier. The shire is named after its former county town, the royal burgh of Berwick-upon-Tweed, which might be claimed by Berwickshire, but the town was sundered by force from its shire by the English in 1174 and changed hands repeatedly during the wasteful wars which rove this island during the Middle Ages, until in 1482 it was finally taken by the English, subsequently becoming attributed to the county of Northumberland. 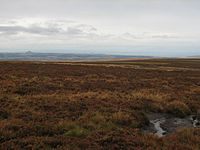 Berwickshire has the fells of Northumberland to the south, East Lothian to the north and to the west are Roxburghshire and Midlothian. The River Tweed forms the boundary with Northumberland and its eastern edge is its 21-mile cliff-bound coastline on the North Sea.

The county is naturally divided into three districts:

The Lammermuir Hills are a range of round-backed hills, whose average height is about 1,000 feet, and here is found the highest point in the county, the shoulder of Meikle Says Law (1,749 feet). The hills reach up to the border of the Lothians, separating the Middle Shires from the counties on the Forth.

The Merse stretches to the south and east, and is a comparatively level landscape.

The coastland is lofty, rocky and precipitous, broken by ravines and not accessible, except at Eyemouth Harbour, where small vessels may dock, and at Coldingham and Burnmouth for fishing boats. Eyemouth in particular is famous for its fishing fleet. St Abb's Head near Coldingham juts into the sea, guarded by a lighthouse. 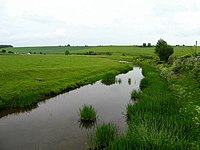 The Blackadder at Greenlaw

Berwickshire's greatest river is its border river; the River Tweed, which is tidal as high as the Union Bridge at Tweedhill (above Paxton, Berwickshire).

The Eye Water is the only river of any size which falls directly into the sea. The others, the Leader Water; the Eden; the Leet; and the Whiteadder; are tributaries of the Tweed. The Whiteadder is the largest tributary river of the county, rising in the Lammermuir Hills in East Lothian and flowing 35 miles to joins the Tweed outside Berwick. The Whiteadder itself has a tributary, the Blackadder, a river wholly of Berwickshire.

The Leader Water courses through the hills in the western part of the shire, creating a valley famous for its fair looks; Lauderdale. 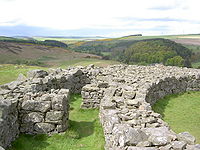 Traces of Roman occupation and of ancient British settlement exist in various parts of the Merse. Edin's Hall Broch or Etin's Hall, on Cockburn Law, four miles north of Duns, is also called the Pech's or Pict's House, and is one of the very few brochs found in the Lowlands. Known history though begins after the collapse of Roman power.

From the late fifth or early sixth century, all the lands to become Berwickshire formed part of the English kingdom of Northumbria, which stretched from the River Forth to the Humber. The folk of the Tweed were converted to Christianity through the missionary efforts of Modan in the 6th century, and by King Oswald and by Aidan and Cuthbert in the 7th century. Cuthbert is traditionally believed to have been born in Lauderdale. In about 650, Ebba, daughter of King Æthelfrith of Northumbria, founded the nunnery at Coldingham. The adjoining promontory of St Abb's Head was named after her.

The Norse invaded Britain in force in the eighth century, but the rugged coast proved an effectual barrier to their attacking Berwickshire. The place-names of Berwickshire are still overwhelmingly English, with little Norse influence. Norse names begin to prevail south of the Tees in Yorkshire, while here the English remnant of the Northumbrians held out against the wild men from the sea. In 886 though, the Vikings destroyed Coldingham. 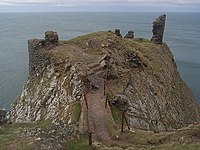 At some time in the early eleventh century, possibly after the battle of Carham in 1018, the lands north of the River Tweed were annexed by Malcolm II, King of the Scots. Birgham, 35 miles west of Coldstream, was the scene of the conference in 1188 between William the Lion and the bishop of Durham, which discussed the attempt of the English church to assert supremacy over the Scottish bishops. Here also met in 1289 a convention of the Scots estates to consider the projected marriage of Prince Edward of England to the Maid of Norway; and here was signed in 1290 the treaty of Birgham, assuring the independence of Scotland. During the long period of international strife the shire was repeatedly overrun by armies of the English and Scots kings, who were constantly fighting for the ancient frontier town of Berwick. It was finally ceded to England in 1482, and the people afterwards gradually settled down to peaceful pursuits. The ford at the confluence of the Leet and Tweed near Coldstream gave access to south-eastern Scotland. Edward I crossed it with his army in 1,296, encamping at Hutton the day before the siege of Berwick, and it was similarly employed as late as 1640, when the Marquess of Montrose led the Covenanters on their march to Newcastle, although James VI had already caused a bridge to be constructed from Berwick to Tweedmouth. There are several places of historic interest in the county.

Upon the site of the nunnery at Coldingham, King Edgar in 1098 founded a Benedictine priory, which was one of the oldest monastic institutions in Scotland and grew so wealthy that James III annexed its revenues to defray his extravagance, a step that precipitated the revolt of the nobles in 1488. The priory was seriously damaged in the earl of Hertford's inroad in 1545, and Cromwell blew part of the church up in 1650. The chancel (without aisles) was repaired and used as the parish church. The remains contain some fine architectural features, such as, on the outside, the Romanesque arcades surmounted by lancet windows at the east end, and, in the interior, the early pointed triforium.

Dissention between the kingdoms of north and south often drove armies northward or southward through Berwickshire in the Middle Ages, and indeed the last English invasion was as late as the reign of Elizabeth I. One of the strongest natural defences of Scotland was the Peaths Ravine, until bridged by Telford in 1786 with a bridge 300 feet long and 123 feet high.

In 1502 in Lamberton church was signed the contract for the marriage of James IV and Margaret Tudor, which led, a century later, to the union of the crowns of Scotland and England.

In the Middle Ages and into the modern period, Berwickshire was an unquiet land, the haunt of robbers like so much of the borderlands. Many castles stood, to resist invasion but also with a viw to the lawlessness about them. Fast Castle, now the poor remnant of a ruin, was a vast castle of the Humes, though from Sir Patrick Hume it passed to Sir Robert Logan of Restalrig and he is alleged to have been conspired to imprison King James VI within the castle's walls in 1600.

In 1603, King James VI ascended the throne of England also and thus uniting the two lands in his person he could enforce order without regard to borders, a task entrusted to a Berwickshire man, the Earl of Dunbar. Dunbar's pacification of the borders was met with great success and allowed Berwickshire to achieve prosperity. Thenceforth, the borderlands were to be named "the Middle Shires".

After Berwick was lost to the English, the county's seat moved to Duns or Lauder until Greenlaw became the county town in 1596.[2] The Sheriff Court sits at Duns.

After Lord Hardwick's Marriage Act of 1745, which regulated marriages in England, eloping couples fled north to marry in in unregulated Scotland, most famously at Gretna Green in Dumfriesshire, but also to Berwickshire, to Coldstream and Lamberton, being close to the boundary. 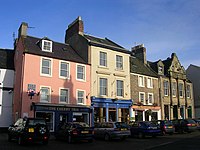 Additionally, a part of the parish of Oldhamstocks otherwise in East Lothian extends into Berwickshire; and a detached part of Lauder is incorporated into the civil parish of Melrose, otherwise in Roxburghshire.

The Bride of Lammermoor

Sir Walter Scott wrote profusely in later years, setting his wild romances in some of the most romantic settings of Scotland and England. His particular tribute to Berwickshire is found in The Bride of Lammermoor (which Donizetti adapted into an Italian opera: Lucia de Lammermoor). Amongst the locations Sir Walter chose for the action of the novel are some sites to be seen in Berwickshire:

The Berwickshire News is published weekly.

Numerous organisations and groups operate across Berwickshire and many are proud to bear the name of Berwickshire in their titles. The Berwickshire Civic Society is a civic society for the county. It campaigns for road signs at the entrances to the county to have notices added saying 'You are now entering the ancient county of Berwickshire'. It holds an annual Keep Berwickshire Tidy Campaign, judged each April.