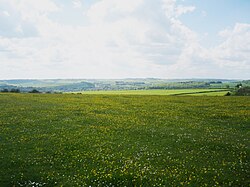 The Berkshire Downs are a range of chalk downland hills in western Berkshire. They form part of the North Wessex Downs "Area of Outstanding Natural Beauty".

The western parts of the downs, around the village of Lambourn are also known as the Lambourn Downs.

The Berkshire Downs lie east-west, with their scarp slope facing north into the Vale of White Horse and their dip slope bounded by the course of the River Kennet. Geologically they are continuous with the Marlborough Downs to the west and the Chilterns to the east. In the east they are divided from the Chilterns by Goring Gap on the River Thames. In the west their boundary is generally taken to be the border between Berkshire and Wiltshire, although the downs in Wiltshire between the Berkshire border and the valley of the River Og are sometimes considered to be part of the Berkshire Downs. 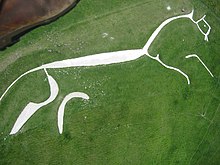 It is generally thought that in Anglo-Saxon times the downs were known as Æscesdūn or Ashdown, and that it was here that the Battle of Ashdown was fought in 871.[1] 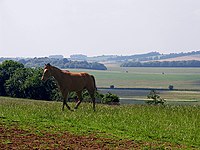 Racehorse on farmland in Lambourn

Downland pasture is firm and well-drained, suited to grazing sheep and grazing and training horses. Horse racing is a major business in the area, with much of the downs covered with training areas, and stables centred on the village of Lambourn.

This Berkshire article is a stub: help to improve Wikishire by building it up.
Retrieved from "https://wikishire.co.uk/w/index.php?title=Berkshire_Downs&oldid=22738"
Categories: