Bere Alston is a small village in Devon, on the Bere Peninsula; the triangular tongue of land between the tidal reaches of the Rivers Tamar and Tavy.

The origins of the village lie in the once thriving local mining industry and market gardening sector. At one time, the mainline trains to London would stop at the village to pick locally grown produce up destined for the capital.

Trains still run to Bere Alston railway station on the picturesque Tamar Valley Line, and there has been discussion of making the town a junction once again by reopening the former 'main line' to Tavistock, the largest town in Devon currently without a railway station.

Bere Alston was once a borough which elected two members to the House of Commons before the Reform Act. Only a few burgage holders were entitled to vote but as most, if not all, of these holdings were held by a single individual for most of the time that Bere Alston was a parliamentary borough elections were seldom contested. The borough was stripped of its franchise in the Reform Act 1832. 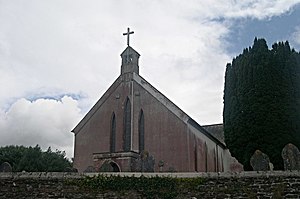 Once home to numerous pubs, the village now only has one public house, The Edgcumbe Hotel, located on Fore Street.Now, there is a beautiful modern cafe opened called Hope Cottage next door to Bere Alston United Church.

There are plenty of beautiful country walks in Bere Alston that cross woods, and fields.

The village is notable for having one of the oldest primary schools in Devon, Maynard's School. Erected by Sir John Maynard in 1665, the original building still forms part of the primary school today (the date is carved on a granite doorway).

Bere Alston United Football Club is a member of the Devon Football Association. The 1st team play their matches in the East Cornwall Premier Division.[2]

There are four pool teams playing in the Winter Tamar Valley Pool League[3] from Bere Alston.