Difference between revisions of "Bentworth"

Bentworth is a village in Hampshire. The nearest town is Alton, which lies about three and a half miles to the north-west. The parish covers an area of 3,763 acres, of which about seven percent is woodland. In the 2011 census, Bentworth had a population of 553.

Bentworth had its own river, the Bentworth Stream, but this, along with many large adjacent ponds, disappeared as a result of drainage in the latter half of the 20th century.

The parish contains several large manors including Bentworth Hall, Hall Place, Burkham House, Gaston Grange and Thedden Grange. The estate of Bentworth Hall, of 500 acres, was split up as a result of various sales from the 1950s.

The village has two public houses; the Star Inn and the Sun Inn (formerly a third called the Moon Inn, but this was destroyed in 1952), a primary school, and its own cricket club. Bentworth formerly had its own railway station, the Bentworth and Lasham railway station on the Basingstoke and Alton Light Railway until the railway's closure in 1932. 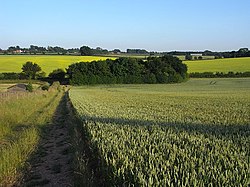 Fields beside the footpath near Powells Farm

The village does not appear in the Domesday Book. Its name appears in later records in a number of forms, including Bentewurda or Bintewurda (12th century) and Bynteworth (15th century).[1] The original meaning of the name may have been a 'place of cultivated land', or a way through land such as woodland.[2]

St Mary's Church (a Grade II listed building) lies at the centre of the village and has parts that date from the late 11th century.

Bentworth has a long history which can be traced to Anglo-Saxon times, despite Roman remains also being found in the area. Bentworth served a role in the Second World War as a children's home was built in the village for those who had been evacuated from London during the London Blitz. In recent years, Bentworth has grown modestly, with the construction of a dozen houses as well as the post-war development in Glebe Fields. 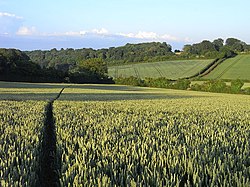 A Stone Age implement discovered in 1942 in a field near Childer Hill, east of the village centre on the way to Thedden is featured in Newbury Museum. A Bronze Age cremation urn was found in 1955 just north of Nancole Copse, now in the Curtis Museum in Alton, together with a bronze Roman coin of Valentinian I found in a garden in the village. Belgic pottery and animal bones were found in 1954 at Holt End between Bentworth and Medstead. Pottery, bone objects, spindle-whorls (stone discs with a hole in the middle used in spinning thread) and fragments of Roman roofing tiles were found at Wivelrod House between Bentworth and the village of Beech.

The route between the Roman town of Calleva Atrebatum (Silchester) to the north of Basing, and the Roman settlement of Vindomis, just east of the modern town of Alton, passed through the Bentworth area: the route of the road today is the A339.[3][4]

Bentworth is not mentioned by name in the Domesday Book of 1086 but it is taken to have been one of the unspecified outlying parishes mentioned for the Odiham Hundred. Soon after Domesday, Bentworth became an independent manor in its own right. In the year 1111 it was given by King Henry I, together with four other English manors, to the diocese of Rouen and Geoffrey, Count of Anjou.[5]

The earliest mention of Bentworth itself was recorded in the charter of 1111-1116 to King Henry I to the Archbishop of Rouen of "the manor of Bynteworda and the berewica (outlying farm) of Bercham (present-day Burkham)".[6] The church of St. Mary was not included in this charter however in 1165 King Henry II did grant it to Roturn, the then Archbishop of Rouen.[6]

When King John began losing his possessions in Normandy he took back the ownership of many manors, including Bentworth. He then ceded the manor of Bentworth in 1207–8 to the Bishop of Winchester, Peter des Roches.[7][8] However, the manor was returned to the Archbishops of Rouen, who successively held the manor until 1316, when Edward II appointed Peter de Galicien custodian of the manor.[9]

Some time after 1280 a new stone hall-house was built in Bentworth, possibly by the constable of Farnham castle, William de Aula.[10] It is a typical mediæval hall-house and has been variously called Bentworth Hall (until 1832) and Bentworth Manor House. Today it is known as Hall Place. In 1330 Matilda de Aula was given permission to have a private chapel at Bentworth Hall, and the remains of this building can be seen today immediately to the southwest of Hall Place. In 1336 ownership of the manor of Bentworth passed to William Melton, Archbishop of York.[9] On his death in 1340 he left his possessions to his nephew William de Melton, son of his brother Henry.

After various vicissitudes in the fourteenth century, the manor came into the Windsor family, who had been constables of Windsor Castle and it remained in their possession for at least one hundred and fifty years.[9]

Modern period until the War

In 1590, Henry Windsor (1562–1605), the 5th Lord Windsor, sold the "sub-manor of Bentworth" to the Hunt family, who had been tenants since the beginning of that century.[9] Ownership passed in 1610 to Sir James Woolveridge of Odiham and in 1651 to Thomas Turgis, a wealthy London merchant.[9] His son, also Thomas, was described as one of the richest commoners in England and in 1705 he left the manor of Bentworth to his relative William Urry, of Sheat Manor on the Isle of Wight.[9]

In 1777 the Urry descendants were his daughters Mary and Elizabeth, who marries respective brothers of the Fitzherbert family. Mary Fitzherbert (who had eleven children), became owner of Bentworth Manor and Manor Farm (now Hall Place).[9]

In 1852 the London and South Western Railway opened a railway station in Alton, connecting to London via Farnham and Woking.[12] In 1901 the Basingstoke and Alton Light Railway opened with Bentworth and Lasham station to the north of Bentworth village.[13]

The Imperial Gazetteer of England and Wales in 1870–72 described Bentworth as follows:

Bentworth is a village and parish in Alton district, Hants. The village stands 3½ miles WNW of Alton r. station, and had a post office under Alton. The parish comprises 3,688 acres. Real property, £4,091. Pop., 647. Houses, 123. George Withers, the poet; sold property in Bentworth at the outbreak of the civil war (1642), to raise a troop of horse. The living is a rectory in the diocese of Winchester. Value, £760, Patron, the Rev. Mr. Mathews. There is a dissenting Chapel.

In 1905 a telegraph office was operated by W. Payne in what was later the Bentworth village shop in Church Street, opposite the playing field to the north of St Mary's school.[8][14]

On the death of Cecil Maynard Gordon-Ives in 1923, the Bentworth Hall Estate (which at the time comprised 479 acres) was then offered for sale, and again by them in 26 June 1930.

In late 1940, a children's home was built in Drury Lane in Bentworth for those who had been evacuated from London during the London Blitz.[15]

As the war progressed Lasham Airfield was built north of Bentworth in 1942. Bentworth Hall was requisitioned for war use and a number of organisations were based there. In 1941 it was used by the Mobile Naval Base Defence Organization (MNBDO) and later it was an out-station of the Royal Navy's Haslar Hospital in Portsmouth, the bedrooms being used as wards. Later the Hall was occupied by officers from the airfield at Lasham. Later, in 1942, Thedden Grange was used as a prisoner of war camp until 1944, and was known as 'Fisher's Camp'.

Before the invasion of Normandy (D-Day), Nissen Huts were built in the woods to the south west of Bentworth Hall and troops were accommodated there before being taken south to embark for the invasion.

After the war, there was a need for more houses and the council estates of Glebe Fields and Glebe Close were built in early 1946. The name "Glebe" is because the land was originally owned by the church.[16]

In 1947, the Bentworth Hall estate was bought by Major Herbert Cecil Benyon Berens, later a director of Hambros bank in London. In 1950, Major Berens built two new lodge houses at the junction of the drive to Bentworth Hall with the main road through the village towards Medstead decorated with the family badge – a bear. The estate was sold for housing after his death in 1981.

The Church of St Mary lies at the centre of the village. There is evidence to suggest that a Saxon church was located here and was rebuilt.[9]

The present church's nave roof and chancel arch probably date from the late 1100s and the chancel itself was built in about 1260 together with the lower part of the tower.[9][17] However, in 1608 the church suffered a "fire happening by lightening from heaven" and some of the earlier structure was damaged.[11]

The present church has flint walls with stone dressings and stepped buttresses, a plinth, and corbelled tracer lights in the nave.[9] The west tower was rebuilt in 1890 and has diagonal buttresses with an elaborate arrangement of steps (some with gabled ornamentation), and at the top is a timber turret, surmounted by a broach spire.[9]