Benllech is a small town on the Isle of Anglesey, found on the A5025, the main road around the island. The popularity of its beach makes Benllech one of the most visited places on Anglesey.

The name Benllech is from the Weslh y benllech, literally "the head slab" or "the head rock", which is to say "capstone" or "head of the rock".[1] It may alternatively mean 'on slate', shortened from the Welsh term 'ar ben llech'.

Benllech is a popular beach holiday destination. Winner of the European Blue Flag award since 2004, the beach shelves and has an abundance of clean yellow sand. The Anglesey Coastal Path passes through. Benllech is also a popular retirement destination as the main proportion of the village are over 50 and are English speaking. The village won "Tidiest Village on Anglesey" competition between the years 1973-79. 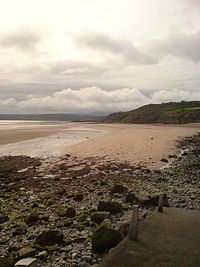 The village has a range of unique businesses which include several public houses and hotels, camping and caravan sites and several bed and breakfasts. The community has a primary school, Ysgol Goronwy Owen; library, local GP, community center, police and fire station, tennis court and bowling green and many other attractions you would typically find in a British village. Between 1909 and 1950 there was a railway station, Red Wharf and Benllech, close to the village which was the terminus of the Red Wharf Bay branch line.