Difference between revisions of "Ben Lawers" 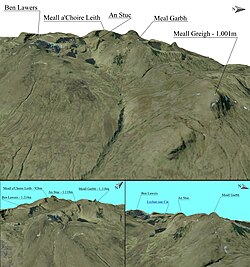 Alternative routes that avoid the erosion caused by the popularity of the two routes described above usually start by following Lawers Burn, which meet the A827 at the village of Lawers. Heading north from the burn allows the walker to climb the peaks to the northeast of Ben Lawers on the way. The most direct route from Lawers is to continue along the burn until Lochan nan Cat ("pond of the cat"), then heading straight to the summit by way of the east ridge.