Belfast International Airport (IATA: BFS, ICAO: EGAA) is a major airport located 11.5 nautical miles north-west of Belfast at Aldergrove, County Antrim. It was formerly named Aldergrove Airport, after the village, and is commonly known by that name still. The airfield was previously shared with the Royal Air Force base RAF Aldergrove, which closed in 2008; the base is now known as Joint Helicopter Command Flying Station, Aldergrove, and both runways are now owned by the airport.

The airport is owned by Abertis,[1] the same company which owns Stockholm Skavsta and Cardiff Airport and is concessionary to Orlando Sanford International Airport and Luton Airport.[2]

Belfast International has a CAA Public Use Aerodrome Licence (Number P798) that allows flights for the public transport of passengers or for flying instruction. The airport's rather distant location compared to Belfast City Airport means that the airport operates 24 hours a day, 365 days a year and is not subject to noise abatement procedures, significant environmental constraints or airspace limitations.

The airport lies within the parish of Killead, between the small villages of Killead (to the east) and Aldergrove (to the west).

The site for the airport was established in 1917 when it was selected to be a Royal Flying Corps training establishment during the First World War. The airport remained open at the end of the war for RAF activity.

Civil traffic began in 1922 when flights were conducted flying newspapers from Chester, and a regular civil air service started in 1933. The flight was to Glasgow and was operated by Midland and Scottish Air Ferries. This was subsequently augmented by flights to the Isle of Man, Liverpool and Croydon, then the location of London’s airport.

During the Second World War, Aldergrove remained an RAF base particularly for RAF Coastal Command. So that the airport could accommodate larger, long-range aircraft, a major works programme was undertaken to replace the four existing runways with two new long paved runways, thereby forming the basis of the layout that still exists at the airport today.

One of the outcomes of the wartime airfield construction programme was the building of RAF Nutts Corner just three miles from Aldergrove. On 1 December 1946, the new site replaced Belfast Harbour Airport as Northern Ireland’s civil airport, as the site at Sydenham was considered unsuitable.

By the 1950s civil air traffic had outstripped the facilities at Nutts Corner and, in addition, aircraft were being regularly diverted to Aldergrove because of adverse weather conditions. In July 1959 the decision was made to move civil flights to Aldergrove to take advantage of the large airfield and this took place in October 1963.

A new terminal and apron were built with the necessary passenger facilities and the complex was opened by Queen Elizabeth, The Queen Mother on 28 October 1963. In 1966 the first regular jet service to London-Gatwick started and in 1968 Aer Lingus and BOAC introduced scheduled services to New York City via Shannon and Glasgow-Prestwick respectively.

In 1971 Northern Ireland Airports Limited was formed to operate and develop the airport and its facilities. A major programme of airfield upgrades was undertaken resulting in improvements to runways, taxiways and the parking apron.

A new International Pier was built together with lounge facilities and car parks, while an additional apron was provided to separate the smaller general aviation aircraft from large commercial jets. In the meantime, British Airways launched the first Belfast to Heathrow shuttle service, and the first Boeing 747 operated from the airport on a charter service to Toronto via Shannon. The first scheduled service to a European city was started by NLM Cityhopper (now KLM Cityhopper) flying to Amsterdam.

In 1983 the airport, renamed Belfast International, was regularly accommodating the largest civil aircraft in service, and with the installation of new technology was capable of all weather operations. In 1985 passenger numbers reached 1.5 million and BMI went into competition with British Airways on the Heathrow service. Further developments to the terminal occurred throughout the late 1980s and early 1990s. A new Executive Aviation Terminal was opened in 1987 and the new cargo centre opened in 1991.

The airport was privatised in 1994. TBI became the new owners of the airport on 13 August 1996, by which time annual passenger numbers had reached 2.5 million. 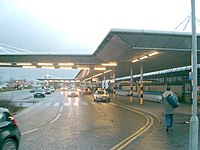 Curbside of the terminal building 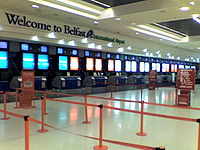 In 1998 EasyJet started operations from Aldergrove with flights to London Luton. Since then the airline has established a large base at Belfast International and a further eleven domestic routes and twelve direct European scheduled routes have been added to the network, making the airline the largest user of the airport.[3]

In December 2007 Aer Lingus opened a base at Belfast International, its third hub (and first outside the Republic of Ireland). By March 2008 three Airbus A320 aircraft were based at the airport serving nine Aer Lingus routes from Belfast, and the airline has restored the link between Belfast International and London Heathrow Airport which was abandoned by British Airways.[4]

Despite these additional flights, passengers at Belfast International did not rise beyond 6 million in 2008 as some had predicted but in fact fell by 10,000 passengers to 5.2 million.

Work has been completed within the airport to move the 'Central Search' area from its previous location, this is part of a bigger plan to increase the area for the main departure Lounge.[5] In addition, as of June 2010 the airport's new drop off zone has been completed and implemented at the front of the complex.

The airport has one jetway located on the international pier that allows speedy boarding. It is used on the Newark Service as well as other charter and high density services to mainland Europe and some transcontinental services. The single terminal is large and accommodates most aircraft. The terminal serves all destinations.

In January 2011, Bmibaby moved to Belfast City Airport in order to keep its operation under one roof with sister company BMI.[6] A few months later, easyJet announced that its London-Luton route would return to Belfast International and a route to Manchester would commence on 31 October 2011.[7]

In July 2011 easyJet announced its fourth London destination to London Southend. In late 2011 and early 2012 the airport invested money into the infrastructure of the airport, this has included surface repairs on the apron, essential repair work under runway 07/25, reconfiguration of the exit hall for international arrivals and converting the domestic arrivals hall to an airside area, which is now complete. Resurfacing of the aircraft stands has begun. In early 2012 Easyjet announced a new route to Birmingham starting in late October 2012. In July 2012 Aer Lingus confirmed it will move its operation to Belfast City Airport; commencing on 28 October 2012 in line with the start of the winter schedule.

Belfast International Airport is one of the most important regional airfreight centres in the United Kingdom, handling 48,000 tons of air cargo in 2008.[8] BIA plays host to a long-established nightly Royal Mail operation. Fedex Feeder announced its base on the 8th November 2011, basing one ATR.

Nearly 5.3 million passengers used Belfast International in 2007, the highest total in the airport's history, with total passenger numbers remaining relatively static during 2008 but declining sharply in 2009 to 4.5 million and again in 2010 to 4 million.[9] Figures for 2011 indicated a small rise to 4.1 million, while a larger increase then occurred to 4.5 million in 2012, returning the total to 2009 levels. The airport is the busiest in Northern Ireland, having experienced steady growth in passenger numbers, aircraft movements and freight throughput over most of the last decade. Belfast International was the 13th busiest airport in the United Kingdom by passenger traffic in 2012, but the large freight volumes handled made it the 7th busiest freight airport in the UK during the period.[9]

Travellers by car from Belfast reach the airport via the M2 motorway.

Translink operates a 24-hour number 300 express bus service to the airport from their Europa Buscentre, in the centre of Belfast. The airport can be reached from Londonderry by the Airporter.