Bawtry is a small market town in the West Riding of Yorkshire which stands at the point where the western branch of the Roman road Ermine Street crosses the River Idle and meets the Great North Road. It is close by the boundary with Nottinghamshire in which its western part lies and also close to Lincolnshire.

Nearby towns include the Lincolnshire towns of Gainsborough to the east and Retford south-south-east; Worksop in Nottinghamshire to the south-west; and Doncaster, in the West Riding, to the north-west. Bawtry had a population of 3,204 in 2001.

Just to the north is Robin Hood Airport, formerly RAF Finningley, and was home to the RAF's No.1 Group Bomber Command Headquarters at Bawtry Hall (see RAF Bawtry). Since 1989 Bawtry Hall has operated as a Christian conference centre and a base for several Christian organisations.

The origin of the name "Bawtry" is not known for certain. The latter part of its name may be the Old English treow ("tree"). Bawtry is not mentioned in the Domesday Book, but was recorded as Baltry in 1199.[1] and as Bautre on a 1677 map.[2] 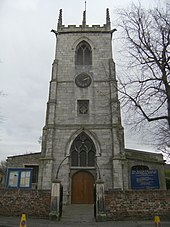 Bawtry was originally a Roman settlement on Ermine Street between Doncaster and Lincoln.

In AD 616, King Æthelfrith of the Northumbrians met his end in battle against Raedwald King of East Anglia, at Bawtry on the River Idle. The site lies close to the present borders of Yorkshire, Nottinghamshire and Lincolnshire and so in Aethelfrith's time on the southern reaches of Northumbria, a dangerous marshy region close to the border with Lindsey.

A small settlement developed around a wharf in the Viking era, and evidence suggests that St Nicholas' Church was first erected in this period.

Around 1200, a new town was developed adjacent to the older village, by either John de Busli or Robert de Vipont. In 1213, de Vipont received a royal charter declaring an annual four-day fair at Pentecost, and a market was first recorded in 1247. The town grew as a river port, and also as a local commercial centre and a stopping point between Doncaster and Retford. By the mid-14th century, the port was exporting wool and other items overseas, and the Hospital of St Mary Magdalene was founded, which survived until the 18th century.

Trade declined, and by the 1540s, John Leland recorded it as being "very bare and pore", but it grew again in the Elizabethan period around the export of millstones.

Bawtry has a school called Bawtry Mayflower School named after the ship Mayflower which took the "Pilgrim Fathers" to America, as their leader, William Bradford, lived at Austerfield, close to Bawtry.

The White Hart on Swan Street is the oldest pub in Bawtry dating back to 1689.

The Courtyard in Bawtry is a modern development hosting a variety of shops and businesses. The entire development was designed by Graham Smith Design, who went on to win the "Green Apple Awards 2005" in recognition of the efforts to preserve and enhance the heritage of Bawtry. 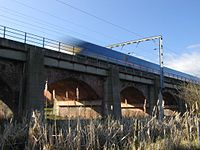