Difference between revisions of "Batsford Arboretum" 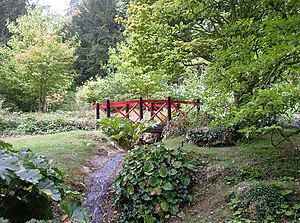 Batsford Arboretum is a 55-acre arboretum and botanical garden laid out on the Cotswold escarpment near Batsford in Gloucestershire, about a mile and a half north-west of Moreton-in-Marsh. It is owned and run by the Batsford Foundation, a registered charity,[1] and is open to the public daily throughout most of the year.

The arboretum contains around 2,900 trees, with a large collection of Japanese maples, magnolias and pines. It maintains the national collection of Prunus (sato-sakura Group) — |Japanese Flowering Cherry — under the NCCPG National Plant Collection scheme run by the National Council for the Conservation of Plants and Gardens.[2]

The estate of Batsford Park was inherited in 1886 by Algernon Freeman-Mitford, 1st Baron Redesdale. He had travelled widely in Asia and developed the garden as a "wild" landscape with natural plantings inspired by Chinese and Japanese practice.

He died in 1916 and was succeeded by David Freeman-Mitford, 2nd Baron Redesdale, who was father of the famous Mitford sisters. They lived at Batsford during the First World War, and Nancy Mitford based the early part of her novel Love in a Cold Climate on their time at Batsford. In 1919 the estate was sold to cover death duties to Gilbert Wills, 1st Baron Dulverton, an heir to the W.D. & H.O. Wills tobacco fortune. His wife Victoria further developed the garden and specimen tree plantings.

After neglect during the Second World War, the arboretum was revived by (Frederick) Anthony Hamilton Wills, 2nd Baron Dulverton (1915–1992), who succeeded in 1956. He consolidated and expanded the collections and brought Batsford into international repute. To ensure the survival of the arboretum he donated Batsford Park to a charitable trust in 1984.

Apart from the arboretum, the remainder of the 5000-acre historic Batsford Estate is privately owned by Lord Dulverton.

The Development of the Arboretum

Algernon Bertram Freeman-Mitford began development of the Arboretum soon after he inherited the Batsford estate in 1886. The design was based on observations of gardens he had seen in China and Japan. He made major landscape changes to the existing area. A newspaper article of the time described some of these in detail as follows.

"The first process was to hew a wide glace through the wood leaving here a lofty fir, there a group of hollies, and preserving a dense belt of trees to form a sheltering circumference. Next, a deep ravine was boldly gouged for half a mile or so, and by cunning engineering enough water was collected to send a small rill down it. Still, there were no rocks – not even a stone; and a rabine with earthen sides differs no whit from a railway cutting. These had all to be brought from a distance. Huge blocks from oolite limestone – many thousands of tons of them, some of them weighing each as much as seven tons were carted from a quarry about a mile off, and all these great slabs and blocks from one end of the glen to the other were laid so as to conform to the dip of the native beds so as to give the impression of a rocky gorge which to puny streamlet has prevailed to cut out in the course of ages. Of course cement had to be used but it has been used so cunningly as to deceive the very elect. Even the bed of the stream had to be laid in cement or the water would have soaked away out of sight."[3]

The Japanese Rest house in 1917

Towards the end of his life Algernon wrote his memoirs and described his garden and the significance of the statues, the bronze deer and the Rest House which he brought here in 1900 and are still in the Arboretum. Describing the Buddha statue he said.

"High up in the wildest part of the wild garden, under the shade of a spreading oak, there stands, or rather sits, turned towards the East, as is fitting, a bronze statue of Buddha of heroic size. His hand is raised in the attitude of preaching ; his features are expressive of the holy calm and noble abstraction which are traditional in the effigies of the great reformer ; the centre of the skull is slightly raised, and between the brows is a curl, representing the wind, the mystic white lock."[4]

Algernon died in 1916 and his son David Mitford inherited the property. David was the father of the famous Mitford sisters who remember their time at Batsford with fondness. Nancy Mitford said in her memoirs that when at Batsford they "ran across country the beautiful bleak Cotswold uplands, starting soon after breakfast when the sun was still a red globe hardly over the horizon and the trees were etched in dark blue against a pale blue, mauve and pinkish sky".[5]

The Mitford family did not stay long at the property because of the large costs in running such a huge house. They sold it in about 1920 and it was bought by Gilbert Wills, 1st Lord Dulverton who according to the youngest Mitford sister Deborah was a lifelong friend of her father.[6]

Lord Dulverton and his wife Lady Victoria further developed the garden particularly the formal areas and the Walled Garden. During the Second World War the area became overgrown and neglected but after he inherited the property in 1956 the 2nd Lord Dulverton restored the garden and returned it to its former beauty.

In 1992 the 2nd Lord Dulverton died and left the Arboretum to the Batsford Foundation which is a charitable trust which promotes research and education into conservation, arboriculture, gardens and architecture.[7]