Bardney is a village in the Lindsey, the northern part of Lincolnshire. The population of the civil parish was 1,848 (including Southrey) at the 2011 census. The village stands on the east bank of the River Witham and nine miles east of the county town; the City of Lincoln.

The name of the village is Old English in origin, and means "Bearda's island", after an otherwise unknown progenitor. The village appears in the Anglo-Saxon Chronicle for the year 716 as Bearddanig and in Domesday Book as Bardenai.[1] 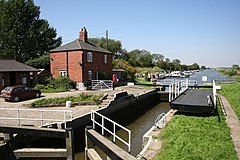 Bardney lock, where old and new courses of the Witham meet

Two Roman artefacts have been found in Bardney; a gemstone and a coin. Nearby villages show evidence of Roman settlement, particularly Potterhanworth Booths and Branston Booths.[2]

Once the site of a mediæval abbey, ruined in Henry VIII's dissolution of the monasteries, agricultural improvement made the village prosperous in the 19th century. Improved transport, first on the River and then the arrival of several railways caused considerable expansion between the traditional centre of the village and the former riverside settlement of Bardney Ferry, where in 1894 the ferry was replaced by the present bridge.[3][4][5][6] A British Sugar factory, built in 1927, survived the closure of the railways but ceased processing on 9 February 2001.[3][7]

Bardney Abbey was founded before 679, perhaps as double house of monks and nuns, and perhaps as a Minster. It was destroyed by the Danes circa 860. Refounded 1087 as a Priory, it became a Benedictine Abbey in 1115, and was dissolved in 1538.[3][8]

In 1537, six of Bardney Abbey's monks were executed for their role in the Lincolnshire Rising. Finally in 1538, the Abbey was disbanded and its property seized during the Dissolution of the Monasteries by King Henry VIII.

The ruins of the abbey are a scheduled ancient monument [9]

Near the Abbey is the site of the deserted mediæval village named Butyate,[10] which was demolished in 1959, and converted to farmland.

There is another abandoned village associated with the former chapels of St Lawrence and St Andrew, north of modern Bardney.[11]

The river Witham has been used for commercial shipping since time immemorial, but was straightened and improved many times including in 1753 and 1812.[3] A straight course (new cut) was made at Bardney and the lock built in 1770 was re-built in 1865.[12]

In 1870, Bardney had a railway station which was a junction for the Branch Line to Louth via Wragby and the Lincolnshire Loop Line. The Louth to Bardney Line closed as well as the Loop Line in 1970 although the section north of Wragby closed prior to 1958-1969.[3] The station building survives and is a listed building.[13] The route of the old railway has been converted into a cycle-track, known as Water Rail Way, which follows the river between Lincoln and Boston. The name of the cycle track refers to the river, the railway, and a wetland bird found in the area, the water rail.

In 1972 the area was host to the Great Western Festival, a four-day pop concert (also known as the Bardney Festival). Funded by Lord Harlech and the actor Stanley Baker (amongst others) it attracted 30,000 people to the venue, held at the nearby Tupholme Abbey ruins. Amongst the artistes playing were Roxy Music and Status Quo and, for two nights running, the Rory Gallagher Band. Despite its popularity the show lost money due mainly to bad weather which blighted the event.

The parish church, St Lawrence, was built around 1434 as part of the Abbey, and part of the abbey ruins have been incorporated into it. It contains some fascinating remnants of that time, and an exhibition on the history of the abbey, as well as later work.

The chancel is of brick, the same type as were used to build nearby Tattershall Castle.[14]

The parish is part of the Bardney Group of the Deanery of Horncastle in the Diocese of Lincoln.

The church is a Grade I listed building.[15]

There is also an active Methodist chapel; the current minister is the Rev'd Gordon Davis.[16]

Bardney stands at the edge of the present-day Lincolnshire Fens, but its name indicates that before the fens were drained for agriculture (from the 17th century onwards) it was surrounded with wet fenland. Nowadays the Lincolnshire Fens are mostly unflooded, very flat and very productive arable farmland. Wildlife observed on the fens near Bardney includes barn owl, red fox and hemlock.

Bardney is surrounded by ancient woodlands composed primarily of lime trees, known collectively as Bardney Limewoods. The flora of the woodlands is indicative of ancient woodland, including Allium ursinum, Hyacinthoides non-scripta and Circaea lutetiana, as well as several species of wild orchids. Wildlife in the limewoods includes deer, jay, hornet and purple hairstreak butterfly.

The modern primary school, Bardney Church of England and Methodist Primary School,[17] was opened in 1983.[3] It replaced two earlier schools merged in 1964.[3]

The village has pre-school facilities, including Bardney Mother and Toddler Group which meets at the Methodist Hall, a butcher's shop, a general store and two public houses.