Difference between revisions of "Banffshire"

The County of Banff is a shire on the Moray Firth and reaching from that rough coastline, stretching inland up the valley of the river Spey into the Grampian and Cairngorm mountains. The highest mountains are Ben Macdhui (4,296 feet), shared with Aberdeenshire, and Cairngorm (4,080 feet).

The rugged mountain areas of Banffshire give way further north to more rolling country with fine glens and some areas of rich plains, running down at last to the coast. The county's main rivers are the Deveron, the Boyne, the Avon (which runs from the height of Cairngorm into the Spey) and the Spey for the miles where it forms the border with Morayshire.

Banffshire lies on the south coast of the Moray Firth, in the row of modestly sized counties along that coast: Morayshire lies to the west, and Inverness-shire inland, while to the east and south is Aberdeenshire.

Banffshire stretches from the Moray Firth up into the mountains. To the west lies Morayshire and all along Banffshire's long eastern border is Aberdeenshire. The mountains of Inverness-shire lie to the south.

The south of the county is mountainous, but cut through with fertile glens watered by burns and rivers which allow extensive farms.

Some of the mountains are thick with forests, some present a beautiful intermixture of rock and copse, while others are covered with brown heath. The greatest mountains are all in the south, where the Cairngorm range is found. Cairn Gorm itself is famous for the amber-coloured quartz crystals found there, known as "cairngorms" in jewellery.

The most famous mountains of Banffshire include:

Also noteworthy is Bin Hill near Cullen in the north of the county, which is visible from a number of distant points including Longman Hill far to the east.

No great rivers belong wholly to Banffshire. On its borders though are the River Spey, which forms for much of its course the western border, and the River Deveron forming the eastern border.

Banffshire's own waters are comparatively short, the chief being the Avon, Fiddich, Isla, Buckie, Deskford with a series of cascades and Livet. Most of the rivers are stocked with trout and the Spey and Deveron are famous for their salmon.

The great glens are distinguished for their romantic scenery, the chief being:

The northern half is mostly a fine, open, undulating country of rich, highly cultivated soil. Here are found most of the towns of the county and the fishing villages. 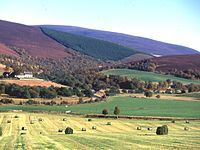 Prehistoric man has left traces in the shire, in particular on the coastal plain. The Longman Hill cairn is a well-known example,[1] and such cairns are found too by Rothiemay, Ballindalloch, Boharm, in Glen Livet and elsewhere. The Romans came this way at least once, and though these lands remained outside their occupation, what is believed to have been a Roman camp may still be made out in Glen Barry. The Danes and Norse came form the sea and were more successful: near Cullen in 960 was a fierce battle, and a sculptured stone at Mortlach is said to commemorate King Malcolm II's victory over the Norsemen in 1010.

Banffshire retained a large Roman Catholic population after the Reformation of the 16th century and suffered greatly in the ensuing struggles. In Glen Livet the Roman Catholics, under the Marquess of Huntly, fought and defeated the Protestants under the Earl of Argyll. During the Wars of the Covenant, becoming the Wars of the Three Kingdoms during the 17th century, Banffshire was a Royalist stronghold and from 1624 to 1645 barely saw rest, combined as these restless times were with the wars between the Highland clans. Nevertheless, the Jacobite risings of 1715 and 1745 left the county comparatively untouched, and thereafter peace reigned. 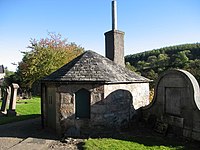 Watchhouse at Kirkton of Mortlach

The nineteenth century saw great improvements in farming techniques as elsewhere, and here in Banffshire the rich soil yielded its crop well as a result: oats, wheat and barley for the brewers throve here and still do. The Earls of Fife and the Earls of Findlater (later Earls of Seafield) did much work on their estates in Banffshire: the Earl of Seafield in 1846 received the honorary gold medal of the Highland and Agricultural Society of Scotland for his forestry; raising vast timber plantations here and in Morayshire and Nairnshire.

The county town is Banff, standing on the sea and the western bank at the mouth of the River Deveron. Macduff stands on the opposite side of the rivermouth.

†: Extends into Morayshire
‡: Shared with Aberdeenshire
Additionally a small part of the parish of Rothes, otherwise in Morayshire extends across the Spey into Banffshire. 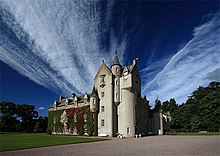 Several mediæval castles lie in ruins in Banffshire, but other great houses stand. 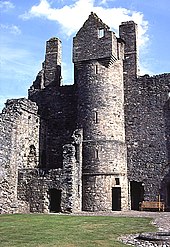