Difference between revisions of "Aysgarth"

Aysgarth is a village in Wensleydale, in the North Riding of Yorkshire, and within the Yorkshire Dales National Park. It is on the south bank of the River Ure and is to be found about 16 miles south-west of Richmond.

The village is famous for the Aysgarth Falls: three spectacular sets of waterfalls on the River Ure.

A Bronze Age burial has been found in the village.[1]

The village is listed in the Domesday Book as Echescard. The name is derived from the Old Norse words eiki ('oak') and skarð, which may mean open space, cleft or mountain pass, so the probable meaning is Oak tree cleft, referring to the valley cut by the River Ure.[2][3][4][5]

At the time of the Norman invasion, the manor was held by Cnut, son of Karli. Afterwards the manor was in the possession of Count Alan of Brittany, who granted lordship to Geoffrey of Swaffham.[6] By the 13th century, the manor was in the hands of the Burgh family of Hackforth. The manor descended with the manor of Hackforth until 1480 at which time they were conveyed to the Crown in the person of Richard, Duke of Gloucester. Some lands in the manor in the 13th century came into the hands of the lords of Middleham and then followed the descent of the manor of Thoralby.[7][8]

The village once had a railway station: Aysgarth station was on the Hawes Branch of the North Eastern Railway, opening in 1878 though it closed in April 1954.[9] 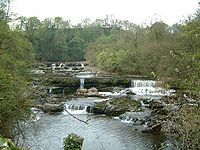 The village lies along the A684 road on the south bank of the River Ure. The nearest settlements are Carperby to the north, Thoralby to the south-west and West Burton to the south-east, all within a mile of of the village.

A portion of the Upper Falls

The Aysgarth Falls are a triple flight of waterfalls on the River Ure over a one-mile stretch of the river. Theyt are distinct waterfalls; the Upper Falls, Middle Falls and Lower Falls. The waterfalls are fast flowing, especially during wet weather, as thousands of gallons of water cascade over the series of broad limestone steps. The Falls are a popular tourist attraction and have been the subject of works by Ruskin, Turner[10] and Wordsworth, who all visited the area. The Upper Fall was featured in the film Robin Hood: Prince of Thieves.[11]

To the west of the village is a Neolithic earthwork called Castle Dykes Henge. It is a scheduled monument.[12]

There are a few local businesses in Aysgarth, and gift shops for tourists. There is a Youth Hostel near the falls.[13] To the east of the village is a caravan and lodge park.

There are two public houses in the village, The George and Dragon Inn and the Aysgarth Falls Hotel, which until 2010 was the Palmer Flatt Hotel.[14] The bar here was known as the Miner's Arms.[15] and as such was listed along with the George in Baines' Directory of 1823.[16]

The George and Dragon dates from the 17th century[17] when it was a coaching inn and is now a Grade II listed building.[18] It was among the top 30 nominees to be Yorkshire's Favourite Pub 2015, an event organized by Welcome to Yorkshire.[19]

The Aysgarth Falls Hotel was listed in the 2016 competition.[20]

The unusually large churchyard extends to about four acres.

The church preserves a number of fittings that were rescued from Jervaulx Abbey at the time of the Dissolution of the Monasteries, including a rood screen and the abbot's stall.[7][8][23]

The Wesleyan and Primitive Methodists[24] both had chapels in the village: the Wesleyan chapel only is still in use.[25] The Society of Friends had a meeting house.[8]