Difference between revisions of "Ayrshire" 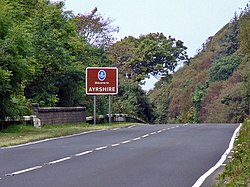 Entering Ayrshire on the A77

The County of Ayr is a shire in Lowland Scotland, along the eastern shore of the Firth of Clyde and inland to the hills. It is bounded by Renfrewshire in the north; Lanarkshire to the east; Kirkcudbrightshire and Wigtownshire to the south; and the sea to the west.

Within the Firth of Clyde, the conspicuous rock of Ailsa Craig belongs to Ayrshire, as do Lady Island (off Troon), and Horse Island (off Ardrossan).

Ayrshire is one of the most agriculturally fertile regions of Scotland. Potatoes are grown in fields near the coast, using seaweed-based fertiliser, and in addition the region produces pork products, other root vegetables, cattle and summer fruits are grown abundantly.

A mixed county, Ayrshire is known for its fertile plains, as the birthplace of Robert Burns and for heavy, black industry, driven by the coal mines of the shire. 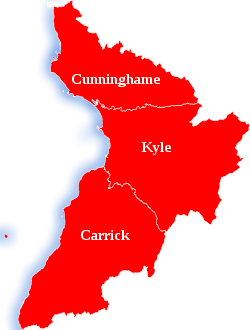 The districts of Ayrshire

Robert Bruce was Earl of Carrick, a title now borne by the Prince of Wales.

Cunninghame in the north includes the royal burgh of Irvine. It is a generally level and fertile land.[1]

Kyle in the middle includes the royal burgh of Ayr and is an area that is partly mountainous. Kyle is further divided by the River Ayr into King's Kyle on the north and Kyle Stewart. Kyle Stewart is sometimes called "Stewart Kyle" or "Walter's Kyle".[2]

Carrick in the south is found between the Doon and the wild district of Galloway; an area once little else than a vast tract of hills and mosses.[1]

In the south, the Galloway Hills intrude into Ayrshire from neighbouring with Wigtownshire and Kirkcudbrightshire, giving Ayrshire some wonderful rugged hill country stretching beyond the county almost to the Solway Firth. To the east of this route through the hills lie the Carsphairn and Scaur Hills which lie to the south east of Dalmellington and south of New Cumnock. Glen Afton runs deep into these hills.

The land of Ayrshire is generally undulating with a small mountainous tract in the north and a larger one in the south and south-east.

The principal hills are:

Ayrshire has no navigable rivers, but the varied and tranquil beauty of its waters has made them better known than many more important streams. The main rivers flowing to the coast are, from north to south:

The River Ayr is the longest river, rising at Glenbuck, on the border of Lanarkshire and flowing 38 miles to the Firth of Clyde at the county town, Ayr. It is a fair river, he beauty of whose banks has long been noted from Sorn and below.

The lesser streams are numerous, but in the verse of Robert Burns, born in Alloway in the county, the Afton, the Cessnock and the Lugar shine out.

Of the many lochs in Ayrshire, the largest of which is Loch Doon in Carrick, five miles long and the source of the River Doon made famous by Burns. From Loch Finlas, about 20 miles south-east of Ayr, the town derives its water-supply.

The River Nith rises in Ayrshire and takes its first miles through Ayrshire before entering Nithsdale and Dumfriesshire.

The workable coals of the true Coal Measures have a wide distribution from Kilwinning by Kilmarnock to Galston and again in the districts of Coylton, Dalmellington, Lugar and Cumnock. These members are overlaid by a set of upper barren red sandstones, probably the equivalents of the red beds of Uddingston, Dalkeith and Wemyss in Fife, visible in the ravines of Lugar near Ochiltree and of Ayr at Catrine. In various parts of the Ayrshire coalfield the coal-seams are rendered useless by intrusive sheets of dolerite as near Kilmarnock and Dalmellington. In the central part of the field there is an oval-shaped area of red sandstones now grouped with the Trias, extending from near Tarbolton to Mauchline, where they are largely worked for building stone. They are underlaid by a volcanic series which forms a continuous belt between the underlying red sandstones of the Coal Measures and the overlying Trias. In the north part of the county, as near Wemyss Bay, the strata are traversed by dykes of dolerite and basalt trending in a north-west direction and probably of Tertiary age.

The county used to be heavily industrialised, with steel making, coal mining and in Kilmarnock numerous examples of production-line manufacturing, most famously Johnnie Walker whisky. In more recent history, Digital Equipment had a large manufacturing plant near Ayr from about 1976 until the company was taken over by Compaq in 1998. Some supplier companies grew up to service this site and the more distant IBM plant at Greenock in Renfrewshire.

Scotland's aviation industry has long been based in and around Prestwick and its international airport, and although aircraft manufacture ceased at the former British Aerospace plant in 1998, a significant number of aviation companies are still based on the Prestwick site. However, unemployment in the region (excluding the more rural South Ayrshire) remains high, above the national average.

There has been no lack of agricultural enterprise. With a moist climate, and, generally, a rather heavy soil, drainage was necessary for the successful growth of green crops. Victorian drainage schemes boosted the farms of the county and with new fertilisers the crop was immensely improved.

Cattle too thrive here: the Ayrshire breed of cows are still maintained, well known for the quantity and excellence of their milk. Ayrshire’s own Dunlop cheese was once well-known, though since replaced with locally made cheddar: the result of more Victorian innovation, in this case an invitation to a Somerset farmer in 1855!

Traces of Roman occupation are found in Ayrshire. At the time of Agricola's campaigns the country was held by the Damnonii, and their town of Vandogara, a recorded battle site, has been identified with a site at Loudoun Hill near Darvel. After the Romans had retreated from Britain, Ayrshire formed part of a British kingdom. Taliesin sings of a victorious battle by Urien of Rheged at Aeron (Ayr) and in due course it became part of the Kingdom of Strathclyde. The lands that became Ayrshire stayed largely out of the records of the early Middle Ages, though Alpin King of the Scots was slain at Dalmellington in the 9th century. Little more is known until the Battle of Largs in 1263, when Alexander III destroyed Norse power and won sovereignty over the Hebrides from King Haakon of Norway.

A generation later William Wallace conducted a vigorous campaign in the shire. He surprised the English garrison at Ardrossan, and burned the barns of Ayr in which the forces of Edward I were lodged. Robert Bruce is alleged to have been born at Turnberry Castle, some 12 miles south-west of Ayr. In 1307 he defeated the English at Loudoun Hill.

Cromwell paid the county a hurried visit, during which he demolished the castle of Ardrossan and is said to have utilised the stones in rearing a fort at Ayr. Between 1660 and 1688 the sympathies of the county were almost wholly with the Covenanters, who suffered one of their heaviest reverses on 20 July 1680 at Airds Moss, a morass between the Ayr and Lugar, where their leader, Richard Cameron, was killed. The county was dragooned and the Highland host ravaged wherever it went. The Hanoverian succession excited no active hostility if it evoked no enthusiasm.

Antiquarian remains include cairns in Galston, Sorn and other localities; a road supposed to be a work of the Romans, which extended from Ayr, through Dalrymple and Dalmellington, towards the Solway; camps attributed to the Norwegians or Danes on the hills of Knockgeorgan and Dundonald; and the castles of Loch Doon, Turnberry, Dundonald, Portencross, Ardrossan and Dunure. There are ruins of celebrated abbeys at Kilwinning and Crossraguel, and of Alloway's haunted kirk, famous from their associations.

Towns and villages in Ayrshire