Aston Somerville is a small village and parish in northern Gloucestershire, approximately three miles south of Evesham in neighbouring Worcestershire. It forms part of the Kiftsgate Hundred. 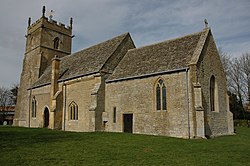 Historically, the Aston Somerville Village has consisted of three individual farms (originally known as the Lower, Middle and Upper Farms), albeit they have usually been farmed as one estate (most notably attributed to the Crowther Family in the 19th century).

St Mary's Church is a Grade-I-listed building dating from the 13th century.[1]

The following names appear on the Village's war memorial in St Mary's Church:

Recorded on another gravestone in the Churchyard is another World War I casualty:

As of July 2012, information on marriages in Aston Somerville that occurred between 1700 and 1812 is available on the internet.[8]