From Wikishire
Revision as of 13:43, 28 June 2016 by Owain (Talk | contribs) (Created page with "{{county|Lancashire}} The Ashton Canal at Droylsden The '''Ashton Canal''' is a canal in Lancashire that runs from Manchest...")
(diff) ← Older revision | Latest revision (diff) | Newer revision → (diff)
Jump to: navigation, search 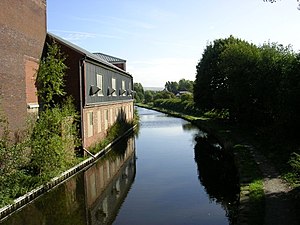 The Ashton Canal at Droylsden

The Ashton Canal is a canal in Lancashire that runs from Manchester to Ashton-under-Lyne.

The Ashton leaves the Rochdale Canal at Ducie St. Junction in central Manchester, and climbs for 6¾ miles through 18 locks,[1] passing through Ancoats, Holt Town, Bradford-with-Beswick, Clayton, Openshaw, Droylsden, Fairfield and Audenshaw to make a head-on junction with the Huddersfield Narrow Canal (formerly the Huddersfield Canal) at Whitelands Basin in the centre of Ashton-under-Lyne. At Bradford, the canal passes by the venue of the 2002 Commonwealth Games.

As well as the Rochdale and Huddersfield Narrow canals, the Ashton Canal connects with another canal: Just short of Whitelands, at Dukinfield Junction/Portland Basin a short arm crosses the river Tame on the Tame Aqueduct, and makes a head-on junction with the Peak Forest Canal.[2]

Many of the canal locks are now listed buildings.[3]

The canal received its Act of Parliament in 1792. It was built to supply coal from Oldham and Ashton under Lyne to Manchester.[4] The first section between Ancoats Lane to Ashton-under-Lyne and Hollinwood was completed in 1796, followed by the lines to Heaton Norris and Fairbottom in 1797. Although there were plans to link it to the Rochdale Canal, it opened as an isolated waterway.

Benjamin Outram was retained to complete the final section between Ancoats Lane and the Rochdale Canal including the Piccadilly Basin. It included the unique Store Street Aqueduct, built on a 45-degree skew and believed to be the first major such structure in Britain and the oldest still in use today.

The section was completed by 1798, but the necessary extension by the Rochdale proprietors to the Bridgewater Canal was not built until 1800. Although the Huddersfield Narrow Canal was open as far as Woolroad by 1798, neither it, nor the Peak Forest Canal were complete. In fact it was another ten years before the former connected to Yorkshire and the east coast.

With little but local trade in its early years, the canal struggled financially and a dividend was not paid until 1806.

It then prospered until competition from railways, and later road transport, greatly diminished traffic, and through traffic had ended by 1945. Traffic on the branches ended in the 1930s. Following nationalisation in 1947–48, traffic did not revive, and all traffic had ceased by 1958, after which maintenance was run down. By 1961, combined with vandalism, the canal had become unnavigable, and its retention for pleasure use seemed unlikely.

The Ashton Canal was one of seven stretches of canal, formerly designated as remainder waterways, that were re-classified by the British Waterways Act of 8 February 1983. Under the act, a total of 82 miles of canal were upgraded to Cruising Waterway Standard.[5]

Pressure from the Inland Waterways Association, combined with the formation of the Peak Forest Canal Society, led to a campaign to reopen the Ashton, with the major organised volunteer clearance of the section though Droylsden in September 1968, known as Operation Ashton. Further campaigning, and the growth of local authority support, led to its restoration, along with the adjacent lower Peak Forest Canal, and reopening on 1 April 1974.[1]

The following structures along the canal are Grade II listed:[6]