Ashford is a village in northern Devon a mile west of Barnstaple, standing a little to the north of the broad estuary of the River Taw. At the 2001 census it had a population of 273.

Despite its name, there is no ford at Ashford: the origin of the name is in a distortion of an original 'Ashworth', from the Old English Æsc weorþ meaning "ash-tree enclosure". The name is recorded as Aiscawurde in 1182.

The parish church of St Peter is a grade II* listed building. The tower was rebuilt in 1798 and the remainder in 1854.[1] 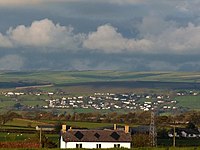 Ashford from a distance
Retrieved from "https://wikishire.co.uk/w/index.php?title=Ashford,_North_Devon&oldid=56423"
Category: