Ashby-de-la-Zouch, often shortened to Ashby, is a small market town in Leicestershire. It is within the National Forest.

Ashby-de-la-Zouch castle was of importance from the 15th to the 17th centuries. In the 19th century the town became a spa town and before the growth of Coalville it was the chief town in north-western Leicestershire.

In the 19th century its main industries were ribbon manufacture, coal mining and brickmaking. The town was served by Ashby Canal from 1804 and the Leicester to Burton upon Trent Line of the Midland Railway from 1845.

The civil parish includes the hamlet of Shellbrook west of the town. Nearby villages include Normanton le Heath, Packington, Donisthorpe, Oakthorpe, Measham, Coleorton and Moira.

The name "Ashby" is a word of Anglo-Danish origin: from the English Æsc ("ash-tree") and the Danish by meaning "farm" or "town".[1]

The suffix is Norman French, which dates from the years after the Norman conquest of England, when the town became a possession of the La Zouche family during the reign of Henry III.[2] 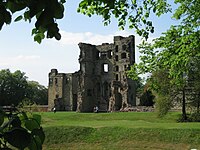 Ashby de la Zouch Castle was built in the 12th century.[3] The town and castle came into the possession of the Hastings family in 1464 and William Hastings, 1st Baron Hastings enhanced its fortifications from 1473.[3] In the English Civil War the town was one of the Royalists' chief garrisons under the control of Colonel Henry Hastings, 1st Baron Loughborough and commander of the North Midlands Army. When the town fell after a long siege in March, 1646 it was counted a great relief to the surrounding towns and villages.[4]

Many of the buildings in Market Street, the town's main thoroughfare, are timber framed, but most of this is hidden by later brick facades. The Bull's Head public house retains its original Elizabethan half-timbering. There are also Regency buildings in this street. Bath Street has a row of Classical-style houses dating from the time that the town was a spa.

The local upper school, Ashby School, previously Ashby Grammar School, is a mixed comprehensive school for 14 to 18-year-olds that was founded in 1567. There were formerly two other endowed boys' schools of 18th century foundation.

A local high school, Ivanhoe College, for 11 to 14-year-old children, is named after the historical novel Ivanhoe by Sir Walter Scott which was set in the area of the castle. In Scott's novel the town hosts an important archery competition held by Prince John, in which Robin Hood competes and wins.

Manor House School is an independent day school in the centre of Ashby for boys and girls aged four to 16. The school is located between St Helen's Church and the ruins of Ashby's historic castle. Pupils travel to the school from a wide geographical area.

St Helen's is Ashby's original parish church. It is a late 15th century Perpendicular Gothic building but the outer aisles were designed by James Piers St Aubyn and added in 1878.[5] St. Helen's contains notable memorials to various members of the Hastings family and others,[3] and a rare 300 year old finger pillory which may have been used to punish people misbehaving in church.

Holy Trinity, which is a Gothic Revival building designed by H I Stevens in the Early English Gothic style and built in 1838-40.[3] It has galleries supported by iron columns.[3] The chancel was added in 1866 and the ironwork chancel screen in 1891.[3]

The baths had their origins in the discovery of a copious saline spring when working coal at Moira Colliery, 3 miles west of the town, in 1805. Here the Moira Baths were built, with a large hotel nearby. After a few years however, it was decided to convey the water to Ashby, where the Ivanhoe Baths were built.

The Royal Hotel was built in 1826 to accommodate visitors to the growing spa.[6] It has a Doric porte-cochère and further Doric columns in its hall inside.[6]

In the 19th century Ashby's main industry was leather working. There was also a cotton factory and a glue factory. Ashby was surrounded by coal mines but was never a coal mining town itself. In the early 21st century, by far the largest employer in the town is United Biscuits.

Willesley Park Golf Course is set in rolling countryside, partly in parkland and partly on heathland. The course was opened for play in April 1921. The first hole is played along an avenue of lime trees which once flanked the old coach road from the old Norman castle in the town to the now demolished Willesley Hall.

Ashby Hastings Cricket Club[7] was founded before 1831. Its ground, the Bath Grounds in the centre of Ashby, hosts Leicestershire CCC 2nd XI matches each year.

The town was served by Ashby Canal from 1804 and the Leicester to Burton upon Trent Line of the Midland Railway from 1845. The canal was abandoned in stages between 1944 and 1966 and the British Railways withdrew the passenger service and closed Ashby de la Zouch railway station in September 1964. The railway remains open for freight.

The nearest railway station is now Burton-on-Trent, over 8 miles away.

Every August, Ashby holds an arts festival currently sponsored by the district council.[8] This features local artists, musicians, songwriters, poets, performers and story tellers. The multiple sites around the town host exhibitions, musical performances, workshops and talks, and the town centre is decorated with flags and an outdoor gallery.

Ashby Statutes, a funfair, is held every September. Instituted by Royal Statute, it was originally a hiring fair when domestic servants and farmworkers would be hired for the year. Market Street, the main road through the town (the former A50 trunk road), is closed for nearly a week and the traffic is diverted along the narrower road, South Street. Locals call this event 'The Statutes'.

In April 1946 the American jazz bassist and composer Charles Mingus recorded a tune called "Ashby de la Zouch" with his band. The title was probably an acknowledgement of guitarist Irving Ashby who took part in the recording.