Armthorpe is a village and parish in the West Riding of Yorkshire which forms the eastern edge of the Doncaster urban area. It has a population of 12,630,[1] increasing to 14,457 at the 2011 Census.[2]

The settlement of Armthorpe was first recorded in 1086 as 'Ernulfestorp', showing the influence of the Vikings on the region. Its probable origination means outlying farmstead or hamlet (from the Old Scandinavian - thorp) of a man named Earnwulf or Arnulfr.

The remains of a Roman village and farm were found on Nutwell Lane and through the centuries Armthorpe was known for its rich farming activities. To some extent the rich crop farming heritage continues today and the area between Armthorpe and the M18 motorway is still dedicated to farming.

Armthorpe (Ernulfestorp) was recorded in the Domesday Book as being the property of the monks of Roche Abbey near Maltby, who had a grange there at which an official resided who managed this part of the estates of the establishment and who was sometimes a brother of the house: they had also an officer called their forester. The parish comprised 3,810.0 acres (15.4 km²) and included the farm of Holm-Wood. The village at this time consisted mainly of scattered houses. 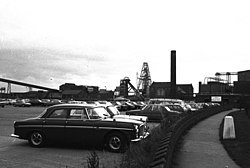 During the late 19th and for most of the 20th century Armthorpe became known for its Coal mining and a deep seam Colliery was sunk. The pit was named Markham Main. The mining increased the local population dramatically and whole new housing estates were constructed to house the mining workers. These housing estates were famous for their architectural layout. From the air you can see that the houses are formed into rings or crescents. Similar examples can be seen in Rossington.

After the closure of the mine 1996 the area went through deep depression. The old colliery site is now a large housing estate, with a thriving community with parks and tracks for walking and cycling to the local wood. 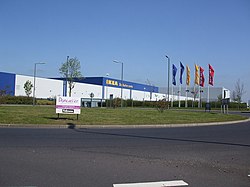 Today, on average, Armthorpe remains one of the more affluent areas of Doncaster.[3]

New industries and jobs have moved into the area and are centred on the distribution centres that are located next to the M18 Motorway operated by Global distribution players such as IKEA and Fellowes.

There are plans to construct even more private housing estates in Armthorpe and leisure and water parks, with the planned site next to the M18 Motorway will be ideally located for leisure travellers from further afield. Armthorpe is also located around four mile from Doncaster Sheffield Airport offering fast access to European business and holiday destinations.

The flat farming land and Motorway access has also attracted greenfield industrial and distribution sites for companies such as IKEA and Next (clothing). New technology centres also exist for companies such as Toyota. Armthorpe is surrounded by many tracks through wooded areas such as Shaw Wood, Crowther Wood and Sandall Beat, perfect for exploring local wildlife. The village is on the Central Route of the South Yorkshire Way long distance walking path.

Armthorpe has three churches (the Methodist Church in Paxton Crescent closed in 2007):