Difference between revisions of "Argyll"

Argyll otherwise known as Argyllshire is a county of mountains, peninsulas and islands. It encompasses most of the Inner Hebrides and the entire western coast of Scotland between the Mull of Kintyre and the Ardnamurchan peninsula

Argyllshire is a large county of breathtaking scenery. It is deeply cut by sea lochs, and divided into peninsulas and scattered islands stretching into the Atlantic. The county embraces most of the Inner Hebrides, including many of the most famous of those isles. The mainland portion is bounded north by Inverness-shire at Loch Leven and at Lochs Eil and Shiel, on the east by Perthshire and beyond Loch Lomond by Dunbartonshire. The south-eastern shore of Argyll is marked by Loch Long and the Firth of Clyde, while the North Channel washes Kintyre in the very south. The isles and western shorelines face the Atlantic Ocean.

The lochs of the mainland part slash deep into the land and divide it into distinctive districts, including Ardnamuchan, which is the westernmost point in mainland Great Britain and Kintyre, the long finger at the end of the Hebrides reaching southward almost to Ulster. The mainland and most of the islands of Argyll are mountainous and faced with cliffs and beaches.

The name of Argyll Gaelic: Earra-Ghàidheal) is an ancient one; "the Borderland of the Gael". It approximates to the first Kingdom of the Scots, Dalriada, which through later conquest and accretion spread to become Scotland. The Queen and the Duke of Argyll can trace their descent from the chiefs of Argyll and of Lorne respectively in modern Argyllshire.

Oban in Lorne, on the Firth of Lorne, is the main ferry port for the Hebrides.

The early thirteenth century author of De Situ Albanie explains that "the name Arregathel means margin of the Scots or Irish, because all Scots and Irish are generally called Gattheli (i.e. Gaels), from their ancient warleader known as Gaithelglas." However, it is often understood to derive from Earra-Ghàidheal, "Coast of Gaels", in contrast to the offshore islands of Innse Gall, literally "islands of the foreigners" so-called because during the 9th to 12th centuries they were ruled by Norse-speaking Gall-Gaels.[1]

The county town is Inveraray, the seat of the Duke of Argyll, though Lochgilphead later claimed to be the county town, as the seat of local government for the county from the nineteenth century. Neither town was the largest settlement geographically nor in terms of population, however as Argyll's largest towns were (and are) Oban, Dunoon and Campbeltown.

The principal districts are Ardnamurchan on the Atlantic, Ardnamurchan Point being the most westerly headland of Scotland; Morven or Morvern, bounded by Loch Sunart, the Sound of Mull and Loch Linnhe; Appin, on Loch Linnhe, with piers at Ballachulish and Port Appin; Benderloch, lying between Loch Creran and Loch Etive; Lorne, surrounding Loch Etive and giving the title of marquess to the Campbells; Argyll, in the middle of the shire, containing Inveraray Castle and furnishing the titles of earl and duke to the Campbells; Cowall, between Loch Fyne and the Firth of Clyde, in which lie Dunoon and other favourite holiday resorts; Knapdale between the Sound of Jura and Loch Fyne; and Kintyre or Cantyre, a long narrow peninsula (which, at the isthmus of Tarbert, is little more than a mile wide), the southernmost point of which is known as the Mull, the nearest part of Great Britain to the coast of Ulster, only 13 miles away.

There are no navigable rivers in Argyll. The two principal mountain streams are the Orchy and Awe: the Orchy flows from Loch Tulla through Glen Orchy, and falls into the north-eastern end of Loch Awe, and the Awe drains the loch at its north-western extremity, flowing down into Loch Etive. 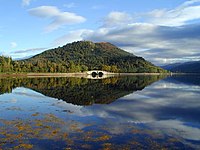 Many sea-lochs cut into the coast of the mainland part of the shire, of which the greatest is Loch Long, which has two main branches; Loch Goil and the Holy Loch. 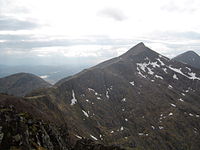 The shire is all over mountains with barely two level acres together, and many among the loftiest in the kingdom. The main notable Munro mountains (over 3,000 feet) are: 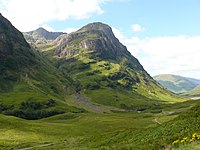 As there are soaring mountains, so there are beauteous or awesome glens between them. The best-known are:

In the glens are The waterfalls of Cruachan are beautiful; and those of Connel, which are more in the nature of rapids, caused by the rush of the ebbing tide over the rocky bar at the narrowing mouth of Loch Etive, have been made celebrated by Ossian, who called them "the Falls of Lora." In several of the glens, as Glen Aray, small falls may be seen, enhanced in beauty when the rivers are in flood. Pre-eminently Argyll is the shire of the sportsman. The lovely Western Isles provide endless enjoyment for the yachtsman; the lochs and rivers abound with salmon and trout; the deer forests and grouse moors are second to none in Scotland.

Ancient sources gives the three clans of the Scots in the Dark Ages as the Cenél nGabráin (in Kintyre), Cenél nÓengusa in Islay and Jura and Cenél Loairn (Lorne), and later the Cenél Comgaill (Cowal). The clans have somewhat multiplied since those days, but the Clan Campbell and The Queen claim descent from the chiefs of these ancient clans.

The early history of Argyll is shrouded in the Dark Ages. At the close of the 5th century Fergus, son of Erc, a descendant of Conor II, High King of Ireland, came over from Ulster with a band of warriors and colonists and established himself in Argyll and Kintyre. Nothing more is known until the days of St Columba, in the reign of Conall I, a great-great grandson of Fergus. Columba landed in 488. In 574 Conall died, and Columba ensured the succession of his first cousin, Aidan, founder of the Dalriada kingdom and ancestor of the royal house of Scotland. This Dalriada was the first Kingdom of the Scots.

In the 8th century Argyll, with the Western Islands and Man, fell under the power of the Norsemen until the 12th century, when Somerled (Irish: Somhairle) succeeded in ousting them and established his authority as thane of Argyll and lord also over Kintyre and the Western Islands. Somerled is seen as the Gaelic liberator of the isles from the Norse, though in truth he was as Norse as Gaelic, descended from the Norse kings and bearing a Norse name Somerleið. Somerled died in 1164 and his descendants, by the name of McDonald, maintained themselves as Lords of the Isles in Argyll and the islands, between the conflicting claims of the kings of Scotland, Norway and Man, until the end of the 15th century.

Argyll was a mediæval bishopric with its cathedral at Lismore. Until 1222, Argyll had formed an independent Celtic princedom; but in that year it was reduced by Alexander II, the Scottish king, to a shire and an integral part of Scotland. The MacDougals were dominant clan of Argyllshire but from this time the Campbells of Loch Awe, a branch of the Clan McArthur, began their rise.

The position of the McDonald Lords of the Isles became precarious: liegemen of the King of Norway in the isles and of the King of Scots in Argyll and caught between them in the wars of Alexander II and III until the Norse surrendered the islands. In 1461, John, Earl of Ross and Lord of the Isles intrigued with Edward IV in 1461, seeking to restore the independence of the Isles, but it was his downfall: the Clan McDonald was broken and the King became Lord of the Isles, into which breach stepped the Campbells. Shrewd marriages brought the chief of the Campbells Argyll and Lorne and in 1471, King James II created Colin Campbell Earl of Argyll. In 1701 the Earl of Argyll was raised to be Dukes of Argyll, Marquess of Kintyre and Lorne, Earl of Campbell and Cowal, Viscount of Lochow and Glenyla, Baron Inveraray, Mull, Morvern, and Tiree, for his services to King William.

In the Jacobite rising of 1745, Argyll remained loyal to the crown and the Duke of Argyll supplied men to fight the Jacobites. Nevertheless, in the aftermath of the rebellion Parliament required the pacification of the Highlands and the confiscation of arms and the banning of Highland dress were equally applied to loyal areas as to disloyal, as Samuel Johnson noted with disquiet on his tour.

In the nineteenth century, Argyll was reached by the railway and by coastal steamers. Little of the county was fit to bear railway lines but those places to which it came flourishes as visitors came to admire the beauties of the wild country. At this time the Duke of Argyll rebuilt his home village, Inveraray as an idyllic village, attractive to visitors as to the villagers, and his castle as a fitting centrepiece for it. 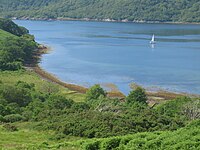 The chief districts of the mainland part of Argyllshire are:

As distinct from the County of Argyll, the name Argyll or Argyle is also applied to that district in the middle of Argyllshire in which the county town, Inveraray is found. 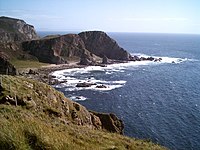 The largest islands of Argyll are: 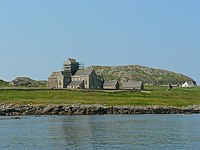 Smaller islands, though no less important, include: 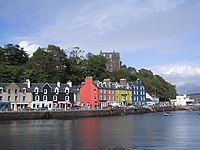 The main ferry operator in Argyllshire is Caledonian MacBrayne, whose services run from the mainland to many of the islands and also to the Isle of Bute. The main ferry terminal for the Hebrides is Oban in Lorne. 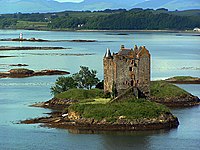 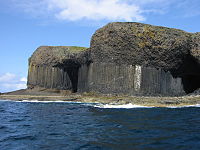 Throughout the shire are found antiquities of many ages. From earliest days are monoliths, stone circles, from later days crannogs in its lochs, and later yet the castles of the chieftains.