The County of Angus or Forfar is a square-shaped shire on the east coast of Scotland. The main town is Dundee, which grew to wealth on jute manufacture, shipbuilding and whaling. Now more diversified industry keeps it going.

Angus rises from the lowlands coast up to the mountains, amongst which are the isolated Braes O' Angus, famed for their beauty. Angus can be divided into four parallel and very distinctive districts; in the north the Grampians, in the south the Sidlaw Hills, between them Strathmore, and the coastlands in the east.

The shire is also known as Forfarshire from its county town, Forfar. A royal residence for some centuries, Forfar is the place where Malcolm III granted new titles to his nobility (a scene Shakespeare portrayed, though he portrayed it on the bloody fields of Dunsinane in Perthshire).

Geographically, Angus can be reckoned in three geographic areas. To the north and west are the mountains, and here are found the five Angus Glens, beautiful but with few inhabitants, the hilllsides grazed by sheep. To the south and east the land is of rolling hills bordering the sea, and here are several noteworthy and well-populated towns, the greatest of all being the City of Dundee, the largest town in Angus. Here too are the county town, Forfar, and Montrose.

Between the coastal plain and the mountains lies Strathmore (Gaelic for "Great Valley") otherwise known as the Howe of Angus. Strathmore is a fertile valley between 6 and 8 miles broad, which is a continuation of the Howe of the Mearns. It runs south-westwards till it enters Strathearn in Perthshire. This is a fertile agricultural area, and which is indeed reckoned the most fertile land in Scotland. Here are grown potatoes, soft fruit and the famed Angus cattle.

Far out in the firth, the notorious Bell Rock, famed in poetry, belongs to the shire. There is a detached part in Perthshire, locally situate in the parish of Collace that also forms part of the ancient parish of Kettins.

The highest mountains are found near the borders with neighbouring counties. The chief munros (those over 3,000 feet) are:

Many mountains of over 2,000 feet are found in Angus.

Lower down, the Sidlaw Hills stretch from Perthshire into Angus but peak at Craigowl Hill at 1,493 feet.

Angus has no navigable rivers.

The River Isla rises in Cairn-na-Glasha and flows generally southward for 45 miles to the River Tay. Near Bridge of Craig is the fall of Reekie Linn (70 feet), so named from the fact that when the stream is in flood the spray rises in a dense cloud like smoke (reek). Near old Airlie Castle are the falls named the Slugs of Auchrannie.

The North Esk is formed by the meeting of the Lee and Mark at Invermark, and thence it flows 28 miles to the North Sea north of Montrose.

The South Esk rises in the Grampians near Broad Cairn and not far from its source forms the renowned Falls of Bachnagairn. After a course of 48 miles it enters the North Sea at Montrose

The Glens of the Angus amongst the Grampians are remarkable for their beauty, and several of them for the wealth of their botanical specimens.

Of the early Picts or their own predecessors there remain weems, or underground houses. Though the Romans never permanently held this land, several traces of Roman camps and stone forts are found; there are vitrified forts at Finhaven, Dumsturdy Muir, the Hill of Laws near Monifieth and at other points.

Angus is a strategic place between the north and the south, guarding a narrow strip where the highlands approach the sea before the coastal plain opens up and again, and war has come here often in unquiet ages. In 685 King Ecgfrith of the Northumbrians fought the Picts under King Burde at a place named by Bede as Nechtansmere, know generally accepted to be Dunnichen. Ecgfrith was slain and Northumbrian overlordship over the north was broken. Conflicts with the Danes took place at Aberlemno and other spots. Alpin King of the Scots was defeated by Aengus in the parish of Liff in 730. At Restennet in about 835, the Picts and Scots had a bitter encounter.

In later times the principal historical events, whether of peace or war, were more immediately connected with burghs than with the county as a whole. There is some doubt whether the county was named Angus, its title for several centuries, after a legendary Scottish prince or from the hill of Angus to the east of the church of Aberlemno. It was early governed by hereditary earls and was made a hereditary sheriffdom by David II. The first Earl of Angus was George Douglas, so created in 1389; he was an illegitimate son of the 1st Earl of Douglas by Margaret Stuart, Countess of Angus in her own right. 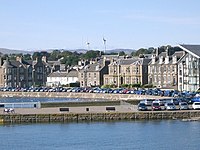 *: A small area of this parish extends into Perthshire around Invergowrie church.