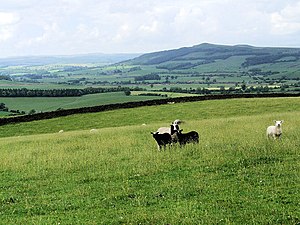 The Aire Gap is a mountain pass through the Pennines formed by geological faults and carved out by glaciers. The term is used in various senses: a vast geological division, a travel route, or a location that is an entry into the valley of the River Aire. It is for the most part in the land of Craven in the West Riding of Yorkshire.

Aire Gap as a geological division

Geologically the Aire Gap lies between the Craven Fault and the limestone uplands of the Yorkshire Dales to the north and the Forest of Bowland and the millstone grit moors of the south Pennines;[1] the system between the Aire Gap and the Peak District.[2]

The gap was formed by the dropping of the Craven Faults in the Carboniferous through Jurassic periods combined with glacial scouring of the ice sheets in the Pleistocene Ice Age. The Aire Gap completes its grand function of splitting the Pennines into north and south by allying with the River Ribble. The Pennine chain is divided into two sections by the Aire Gap formed by the River Aire whose waters flow south to the Ouse and thence the Humber to the North Sea and the Ribble flowing west to the Irish Sea.

Aire Gap as a route 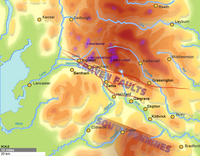 Map of the Aire Gap

The Pennines form a natural barrier to east-west communications, but there are the Tyne Gap linking Carlisle and Newcastle and the Aire Gap linking Lancashire and Yorkshire.

To walk the Pennine moors is "potentially dangerous if the weather is bad and you are ill equipped. If the cloud comes down you will need both a compass and a knowledge of how to use it."
—Jim Jarratt, 2006[3]

Its extent is vague. The Rev T D Whitaker of Whalley, the historian of Craven, wrote in the 19th century:

"This depression is known as the Aire Gap, occasionally as the Skipton Gap, Skipton being at its eastern end and Hellifield at its western end",
—T. D. Whitaker, Vicar of Whalley, 1878[4]

Skipton is now considered more central to the Aire Gap than terminal.

The Aire Gap has been of considerable strategic importance in days gone by, with the castle at Skipton overseeing the general area[5] 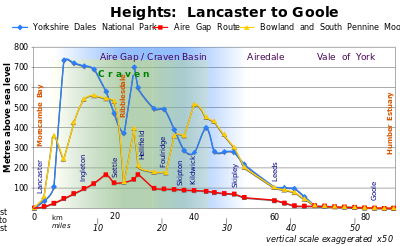 Cross-section of Great Britain coast to coast; the red line

The treeless moorland gives no shelter from storms. Even modern Pennine transport can find it a formidable barrier for roads can be blocked by snow for several days. But the Aire Gap route is a welcoming sheltered passageway, and also inhabited along its length.

The Aire Gap was of great strategic significance for Lancashire and Yorkshire in history, for it provides a low-altitude pass through the Pennines; "the backbone of England". It was the corridor from the [[lake District and the Kingdom of Strathclyde to the Vale of York. Even Neolithic long-distance trade is proven by many finds of stone axes from Westmorland.

To the north of the Aire Gap stand limestone mountains of up to 2,415 feet above mean sea level and to its south lie bleak sandstone moors, that above 902 feet grow little but bracken.[6]

The builders of the "Little" North Western Railway sought the lowest course through the Aire Gap and found that to be 545 feet near Giggleswick scar, and 525 feet just east of Hellifield.

The nearest alternative pass through the Pennines is Stainmore Gap (Eden-Tees) to the north, but that climbs to 1,342 feet and its climate is classed as sub-arctic in places.[7] The nearest low-level routes across the country are the 748 feet Tyne Gap over 60 miles to the north, or the Midlands just as far to the south.