Aberystwyth is a substantial seaside town in Cardiganshire. It is a historic market town and holiday resort, as well as a university town. It stands where the rivers Ystwyth and Rheidol meet; its name means "Ystwyth mouth".

Since the late 19th century, Aberystwyth has also been a major Welsh educational centre, with the establishment of a university college there in 1872. The town's population was officially 15,935 in the 29 April 2001 census. During nine months of the year, there is an influx of students; to a total number of 8,841 at July 2009,[1] but there is no reliable measure of the number of those students whose family residence is outside Aberystwyth. 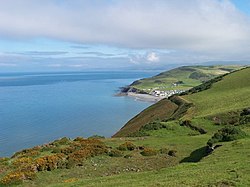 The town stands near the meeting of the rivers Ystwyth and Rheidol, on Cardigan Bay. The town takes its name from the Ystwyth, though since the reconstruction of the harbour, the Ystwyth only skirts the town and leaves the Rheidol alone to flow within it.

Aberystwyth has a pier and a fine seafront which stretches from Constitution Hill at the north end of the Promenade to the mouth of the harbour at the south, taking in two separate beach stretches divided by the castle. Today it is essentially made up of four different areas: Aberystwyth town, Llanbadarn Fawr, Waunfawr and Penparcau, with Penparcau being the most populous.

Aberystwyth is an isolated town, considering the population density of the United Kingdom. The nearest substantial settlements are located at least an hour and three-quarters' drive away: Swansea to the south is 70 miles away; Shrewsbury to the east is 75 miles away; and Wrexham to the north-east is 80 miles distant.

Aberystwyth is a major tourist centre and a cultural link between North Wales and South Wales. Constitution Hill is scaled by the Aberystwyth Electric Cliff Railway giving access to fine views and other attractions at the top, while much of the finest scenery in Mid-Wales lies within easy reach of the town. This includes the wilderness of the Cambrian Mountains, whose valleys contain forests and meadows which have changed little in centuries. A convenient way of reaching the interior is by the preserved narrow gauge Vale of Rheidol Railway.

Although the town is relatively modern, it contains a number of historic buildings, including the remains of the castle and the Old College of Aberystwyth University nearby. The Old College was originally intended to be a hotel but, due to a lack of funds, the shell of the building was sold to the university. The new university campus overlooks Aberystwyth from Penglais Hill to the east of the town centre. The terminus for the standard-gauge railway is also very impressive, having been built in 1924 in the typical style of the period. Generally, the architecture is a mix of Gothic, Classical Revival and Victorian.

The town is generally regarded as the capital of Mid Wales and several institutions have regional or national offices there, amongst which is the National Library of Wales. The library also incorporates the National Screen and Sound Archive of Wales, one of six British regional film archives. The Royal Commission on the Ancient and Historical Monuments of Wales, which maintains and curates the National Monuments Record of Wales, providing the public with information about the built heritage of Wales. Aberystwyth is also the home to the national offices of UCAC and the Weslhs Language Society (Cymdeithas yr Iaith Gymraeg) and the site of the Institute of Grassland and Environmental Research. The Welsh Books Council and the offices of the standard historical dictionary of Welsh, Geiriadur Prifysgol Cymru, are also located in Aberystwyth.

Evidence of Mesolithic occupation survives by Tan-y-Bwlch at the foot of Pen Dinas, where signs of flint knapping have been found.[2] An Ion Age fortress stood on Pen Dinas, a hill in Penparcau overlooking Aberystwyth, which indicates that the site was inhabited before 700 BC.[3][4]

On a hill south of the present town, across the River Ystwyth, are the remains of a mediæval ringfort believed to be the castle from which Princess Nest was abducted. This rare survival is now on private land and can only be accessed by arrangement.[5]

The recorded history of Aberystwyth may be said to date from the building of a fortress in 1109 by Gilbert Fitz Richard (grandfather of Richard de Clare, known as Strongbow, the Welsh-Norman lord notable for his leading role in the Norman invasion of Ireland). Gilbert Fitz Richard was granted lands and the lordship of Cardigan by Henry I, including Cardigan Castle. The fortress built in Aberystwyth was located about a mile and a half south of today's town, on a hill over the south bank of the Ystwyth River.[6] Edward I replaced Strongbow's castle in 1277, after its destruction by Welsh rebels,[7] but in a different location, at the current Castle Hill, the high point of the town.

Between the years 1404 and 1408, Aberystwyth Castle was in the hands of Owain Glyndŵr but finally surrendered to Prince Harry (the future King Henry V of England). Shortly after this, the town was incorporated under the title of Ville de Lampadarn (the ancient name of the place being Llanbadarn Gaerog or the "Fortified Llanbadarn", to distinguish it from Llanbadarn Fawr, the village one mile inland. It is thus styled in a royal charter granted by King Henry VIII, but by Elizabeth I's time, the town was invariably named "Aberystwyth" in all documents.[8] 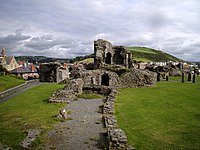 In 1649, Parliamentarian troops razed the castle,[9] so that its remains are now inconsiderable, though portions of three towers still exist. In 1988, an excavation within the castle area revealed a complete male skeleton, deliberately buried. Rarely surviving in Wales' acidic soil, this skeleton was probably preserved by the addition of lime from the collapsed building. Affectionately known as "Charlie", he probably dates from the Civil War period, probably dying during the Parliamentarian siege and is now housed in the Museum in the town. His image is featured in one of nine mosaics created to adorn the castle's walls.[10]

Hafod Uchtryd was a mansion built by Thomas Johnes starting in 1783, part of it being designed by John Nash. The landscaped gardens were formed by blasting parts of hills away to create vistas. Roadways and bridges were built and hundreds of thousands of trees were planted. The result was a landscape that became famous and attracted many visitors including Samuel Taylor Coleridge. It is thought by some to have inspired the passage in his poem Kubla Khan:

And here were gardens bright with sinuous rills,
Where blossomed many an incense-bearing tree;
And here were forests ancient as the hills,
Enfolding sunny spots of greenery.

The house was demolished in 1955 but the landscape remains.[11] 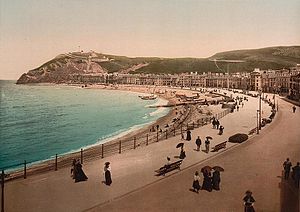 Aberystwyth during the Victorian era

The Cambrian Railway line from Machynlleth reached Aberystwyth in the 1860s, closely followed by rail links to Carmarthen, which resulted in the construction of the town's impressive station. The Cambrian line opened on Good Friday 1869, the same day that the new 958-foot Royal Pier opened, attracting 7,000 visitors.[12]

The railway's arrival gave rise to a tourist boom and the town was once even billed as the "Biarritz of Wales".[13] During this time, a number of hotels and fine townhouses were built including the Queens Hotel. One of the largest of these hotels, "The Castle Hotel", was never completed as a hotel but, following bankruptcy, was sold cheaply to the Welsh National University Committee, a group of people dedicated to the creation of a Welsh University. The University College of Wales (later to become Aberystwyth University) was founded in 1872 in this building.

Aberystwyth was a contributory parliamentary borough until the Third Reform Act, which caused its representation to be merged into that of the county in 1885.

In 1895, various businessmen who had been behind the Aberystwyth New Harbour Company formed the Aberystwyth Improvement Company (AIC) to take over the works of the defunct Bourne Engineering & Electrical. In 1896, the AIC completed three projects: the new landside pavilion for the Royal Pier; built the Cambria Hotel (later the United Theological College) and formed Constitution Hill Ltd, to develop a Victorian "theme park". Chief engineer George Croydon Marks designed all the AIC developments, including the United Kingdom's longest funicular railway, which takes passengers up a 50% gradient to a park and camera obscura. 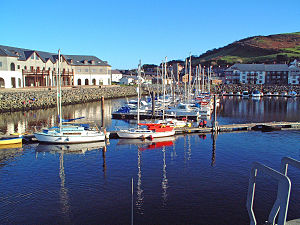 On the night of Friday, 14 January 1938, a storm with estimated wind speeds of up to 90 miles an hour struck the town. Most of the promenade was destroyed, along with 200 feet of the pier. Many properties on the seafront were damaged, with every property from the King's Hall north affected, those on Victoria Terrace having suffered the greatest damage. Work commenced on a protective coffer dam until 1940, with total costs of construction coming to £70,000 (equivalent to £2.5 million today).[14]

Aberystwyth Arts Centre is one of the largest and busiest arts centres in Wales.[15] It encompasses a 312-seat theatre, 900 seat concert hall, 125 seat cinema, and has accompanied studio, galleries, plus public spaces which include cafes and a bar.[16]

The major languages spoken in Aberystwyth are English and Welsh. The 2001 census reported that, in the seven wards of Aberystwyth, 39% of the residents identified themselves as either being able to speak, read or write Welsh. This is lower than Cardiganshire as a whole (54%) but higher than Wales overall (23%).

Things to see in the town 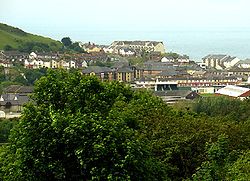 As well as having two cinemas and a golf course, the town's attractions include: