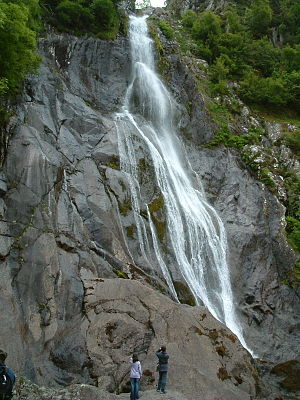 Aber Falls (Welsh: Rhaeadr Fawr) is a spectacular waterfall located about two miles south of the village of Aber, or Abergwyngregyn, in Caernarfonshire.

The waterfall is formed as the Afon Goch plunges about 120 feet from the Carneddau range of Snowdonia. The fall is over a sill of igneous rock in the mountains.

Visitors walking along the main footpath towards the falls may spot several small Bronze Age settlements including an excavated roundhouse and smithy fenced off with an information plaque adorning it, several standing stones and cairns are also present, most of these sites can be found on the right side of the pathway. There is also a piece of recording equipment that is recording the weather

The river is named after the village of Aber, which lies below the waterfall and at the bottom of the river at the coast. Aber was once where the Kings of Gwynedd held court.

Visitors can park at y Bont Newydd, from where the Falls are accessible on foot on a clearly marked trackway. There is a small charge for parking but there are toilets and picnic benches available. The nearest place where food can be bought is the café in the tourist information centre at Aber village.

It is possible to bathe in the plunge pool of the falls, although the water is cold even at the height of summer and care must be taken on the often slippery rocks.

Aber Falls appear in a number of novels, mainly of the historical-romantic sort set in the bloody days of the Kings of Gwynedd, for example Sharon Penman's Here Be Dragons and The Reckoning, and Edith Pargeter's The Heaven Tree.